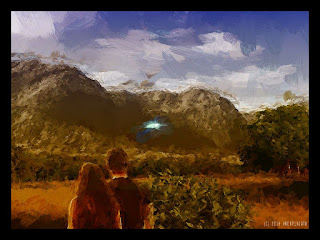 Since the dawn of the UFO phenomenon in our country, this lovely Patagonian city has been the locale for notable incursions by unidentified objects. Its proximity to Rawson and the mysterious Atlantic littoral area, known for repeated reports on USOs in the gulfs of the Valdes Peninsula, have turned it into a special area. The first major news item was recorded on the evening of 21 October 1954 (the year of the Argentinean saucer flap) when a large number of local residents noticed a large white luminous object, looking like a fluorescent tube, flying over the area. A few months later, on the evening of 25 February 1955, a bizarre round object, red in color, was seen from the local airport. Surprisingly, the object morphed into a "flying cigar"-shaped object, leaving a white wake as it passed. The surprises did not end there: a few minutes later, several eyewitnesses reported seeing a strange black aircraft flying overhead. 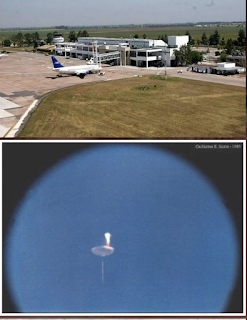 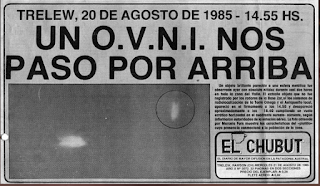 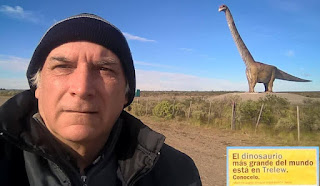 Over the course of the years, the phenomenon relocated to nearby marine areas, where the gulfs became the showpiece in matters related to USOs, although reports continued to come in from these areas on saucer visitations. Perhaps the best known was the one which took place on 20 August 1985 when an enormous vehicle flew over the local geography for nearly two hours, exactly from 14:55 to 16:40 hours. This was one of two objects that had been engaged in a tour of South American lands since Saturday, August 17 in Chile and later over several Argentinean provinces, leading up to the sighting on 17 September practically over the Federal Capital (Buenos Aires) before the eyes of millions of citizens. The fact is that this gigantic Patagonian object was seen by hundreds of residents and by the staff of the Almirante Zar Airport, although its radars did not "pick it up." 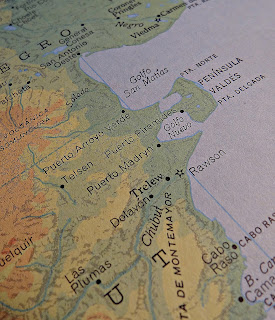 Since then, Trelew has come to be known not only for its landscape and the Welsh tradition in Dolavon and Gaiman, its wind power farms, the splendid Florentino Ameghino Dam and Mesozoic remains of dinosaurs, but also for the periodic presence of UFOs in its land and skies. 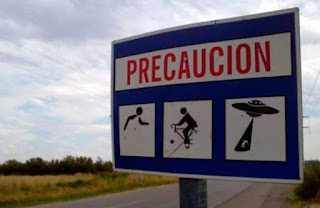 A sign on one of its roads has been warning drivers and pedestrians - since decades past - of the risk of being abducted or having a close encounter with the unknown. Hard to believe, but nonetheless true. Somewhat exaggerated, when examined objectively and statistically, since Trelew isn't a "hot spot" in Argentinean ufology. In any case, we were able to ascertain some of this during our 4400 kilometer journey around Patagonia in October 2017, taking advantage of a trip to ICOU's 10th Federal Event held in El Bolsón (Rio Negro) by the RIO Group of the Andean District of the 42nd Parallel.