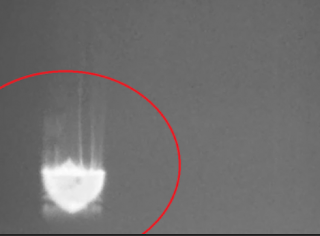 Security cameras recorded a strange object in a Barranca waterfront. Some claim it was a UFO.

An unidentified flying object crossing the skies of Barranca was picked up by security cameras yesterday morning (03.12.2018) around 3:00 a.m. Images disseminated over social media show a radiant, zig-zagging luminous phenomenon over the Malecón de Chorrillos of this northern city.

The security cameras were engaged in their routine task of filming the waterfront area from the last block on Avenida Grau when they suddenly picked up this object, which could have been a UFO. The camera managed to focus on the object's oval shape before vanishing completely.

This is the first time that such a phenomenon has been recorded. According to the website of the regional newspaper "El Libertador", this video, with a duration of two minutes and fifteen seconds, has already elicited a variety of opinions. However, it has been confirmed that the image is real.

Social media users claimed it was a UFO. Others suggested that it was a psycho-social phenomenon using fake imagery and that the cameras were best used in catching criminals up to no good.

Another cybernaut stated that this phenomenon occasionally takes place in the stratosphere and that no strange object is involved. Was it a UFO? You be the judge.

[Translation (c) 2018 S. Corrales, IHU with thanks to G. Giménez and the TROME newsroom]
Inexplicata Podcasts covering items from UFO / paranormal history in Spain, Latin America and the Caribbean