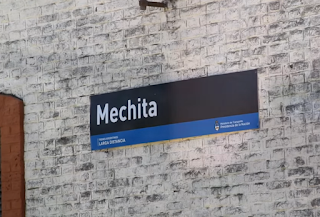 The sighting by several local residents has become that talk of the town, resulting in an investigation by the UFO specialist.

Luis Burgos, a scholar of the subject, visited Mechita last week for a face-to-face interview with witnesses who claim having seen the triangular object on the dark night of Friday, January 24.

An item of information that had not become widely known - and caught researchers' attention, was a situation that took place only a few meters away from the house of Diego Sarquis (eyewitness). It involves the pools at the Mechita Swim Club, where the woman in charge of the facility took a photo of the next morning, showing that water had spilled out of the pools and had not yet evaporated in spite of the prevailing heat. 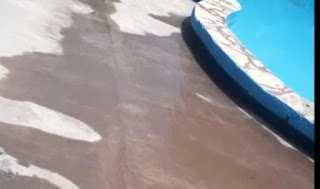 Researchers suspect that the water could have been subject to a UFO attraction factor. "70% of UFO apparitions take place over bodies of water," explained FAO members.

Argentina: An Aerial Intruder over Mechita 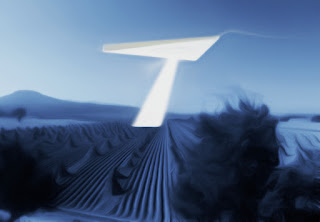 Legend tells us that in the early 19th century, a handsome but wild pony wandered the plains surrounding a lagoon in western Buenos Aires province - a reddish beast with a savage mane. It was admired by all the locals, and everyone harbored the dream of capturing it and taming it. Many tried, until one fine day, some gauchos cornered it against the lagoon. The pony took its own life, leaping into the waters from a cliffside, vanishing in a matter of seconds.
The legend of El Bragao was thus born. Around 1845, when the village of Santa Rosa del Bragado was established in the vicinity of this event, its founder, Sgt. Major Eugenio del Busto, had taken his inspiration from the popular story that spread from mouth to mouth over the years.

Bragado is a city located on National Route 5, 210 kilometers west of Buenos Aires - a road that has its share of enigmas, with sightings of all manner of UFOS (keep in mind the famous 1963 Abreu case), but also strange situations experienced by drivers over the years, who found themselves "reappearing suddenly" in the blink of an eye on other sections of the road, unmindful of having passed through them.

10 kilometers northeast of Bragado we find the town of Mechita, population around 1900, and some 3 kilometers distant from the aforementioned road. There we find the Museo Ferroviario (Railroad Museum) and containing all the history of the western railroad, much to the pride of its inhabitants.

It is here that we find Diego Marcelo Sarquis, age 43, a native of Buenos Aires and the protagonist of a UFO incident with exceptional characteristics. Unpolluted by the subject aside from having heard all manner of stories, the witness never had an experience that he could relate to what we have been studying for decades - the UFO phenomenon.

Having become aware of the incident, we contacted Diego, who kindly shared with us his incredible sighting of the evening of 24 January 2020. But it would be best to allow the astonished witness to tell the story himself.

"On Friday the 24th at around 22:30 hours, something incredible happened to me that I never in my life thought would befall me. I was at a friend's house and he was kneading dough for homemade pizzas. The activated pizza oven was so hot that I asked permission to remove my t-shirt. He said OK. Still feeling hot, I stepped outside, leaned against his car and stretched backward...at that moment I raised my eyes to the sky and saw a black triangle, darker than the sky. A circle of red light was visible at each tip, but not entirely, rather in the shape of a red ring. This triangle was rotating from right to left, flying slowly to my right. I calculated that the object was some fifty meters over the treetops. It was very, very low.

"No noise could be heard. No sound of an engine or turbine, completely silent. I suddenly began yelling: "A UFO! A UFO!" when my friend and his children came out, the object had already gone, covered by the bordering trees, and even so, it was traveling very slow and rotating with an apparent SE-NW heading, going toward Junín.

"I made a drawing of what I saw, since in my forty-three years of life I was never able to see anything similar. The object was as big as a house (greater than ten or fifteen meters in length) and I can assure you that seeing all this made me feel very frightened. As from that night, a thousand questions are circling in my head. My idea is to look every night, with my cellphone ready to record, should I be lucky enough to see it again."

These flying devices are nothing new in the domestic case histories, and therefore, worldwide ones as well. Their true origin has been, and remains, the cause of major debate in UFO forums. It is an overwhelming phenomenon to someone like Diego, not versed in the subject and caught unawares. The first case involving a flying triangle over Argentina can be dated, according to our exclusive UFO database - which holds information on 5500 cases starting in 1947 - to the year night 1958 in Mendoza, when 'a strange black aircraft' was seen descending in the vicinity of the El Plumerillo Airport. Since then, we have been able to earmark some very interesting characteristics, as follows:

- One hundred thirty reports of triangular, boomerang-shaped, flying wing or arrowhead-shaped objects fill our dossier.
- They are mostly large in size;
- Their color is predominantly black;
- 95% of their incursions are nocturnal;
- Their movements are variable, as we have description of slow, moderate, swift and even supersonic flight.
- 70% of their manifestations occurred in absolute silence. No noise, buzzing or rumbling was heard at all.
- The duration of their flight is not extensive. Their transit is short-to-medium in the travel that has been observed.
- A slight number of episodes hint at landings or near-landings by these craft.
- 95% of the evens suggest that these triangles fly alone.

From the 1950s to the 1980s, we only have 17 reports. The massive increase occurs in the 1990s, with 21 reported sightings. During the first decade of the 21st century, the investigated cases totaled 36 and the maximum increase, up to now, was in the 2010s, with the uncanny number of 51 reports.

In this newly-commenced decade, we are starting to receive the first episodes of these mysterious devices that fly over our heads with impunity.

All this suggests that the triangular UFO phenomenon will continue to manifest itself more frequently over time. The affected provinces were 17 as well as the Federal Capital. It is remarkable that we have no reliable reports from the remaining 6 provinces.

The two Argentinean regions yielding the largest number of reports correspond to the Western Corridor, as I christened it in 2008, which covers the strip running from Ramos Mejia to Lujan, almost parallel to National Route 7, and the "Argentinean Nest" region, mostly in La Plata and extending to Sanborombón Bay, and from Route 2 to the coast of Rio de la Plata.

40% of all triangular UFO apparitions in our country - from 1958 up to this day - have occurred in these two areas. A major difference compared to the rest!

In closing, we can say that this category of unidentified object does not bring about the controversial and fearsome human abduction phenomenon. At least we do not have, to date, any abduction event produced by an object of these characteristics.

"It began one lost night on a lonely country road, looking for a shortcut. David Vincent has seen them..." says the opening narration to the epic The Invaders television series. From January 24, 2020, Diego Sarquis can be added to the long list of those who have seen them. Startled at first, and beset by many questions inner doubts following the sighting, the witness of that night in Mechita now knows we are not alone.

His case is exceptional from every standpoint, given the strangeness and reliability of the eyewitness account, so sought by current ufology. Even the counterclockwise movement of the vehicle, for which I was only able to find another incident: an event in Banfield (Buenos Aires) on 23 August 1992, involving the passage of a dark triangular object rotating on its own axis! Serquis has seen the same, nearly 28 years later.

We should also bear in mind that the town of Gobernador Ugarte is located to the southeast. It is the location of some amazing UFO events, which we discovered in the year 2002, which have withstood the test of time. It is in a straight line from Mechita.

Obviously, we cannot bring this to a close without listing the typical questions raised by the event, giving rise to myriad hypotheses, ranging from alien craft to U.S. prototypes.

What was that object doing over Mechita?
What was its final destination?
Where did it come from?
Did it follow the course of the Samborombón River?
Could it have flown over Ugarte earlier>
Could it have landed in some field in Buenos Aires province?
Was it detected by some airport radar?
Are there free areas or flight permits to operate with impunity over our heads?
What is the role of the air force in all this?

In other words, as I have always said: "Time is always in the researcher's favor, in this case, ufologists. Let us hope to be alive for when the enigma is finally deciphered."