Mexico: "UFO" Hauled Around the City 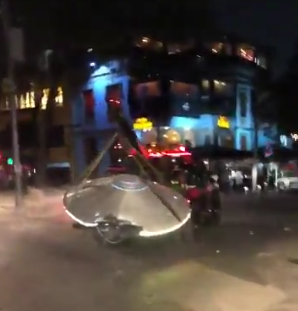 Mexico: "UFO" Hauled Around the City

It is well known that the Mexican capital city's airspace is highly complex. The Benito Juarez International Airport (MCIA)'s operations in the metropolitan area of valley of Mexico are a source of complication for all flying objects.

An unidentified flying object was seen hauled around the city streets of the Roma Norte district, along the Durango Diagonal at the Cibeles Roundabout.

The video circulating on social media has gone viral this weekend.

There is still no official statement about this object.

It is possible that this "interstellar object" decided to make its way along the lightly occupied roadways this Christmas weekend. However, it doesn't seem to have found a "shortcut" to get out of Mexico City and was towed away by a wrecker.

Other stories suggest the UFO is a prop connected to the shooting of the next season of the popular X-Files TV show in Mexico.