Beings from other worlds seem to be on the lookout for developments on planet Earth and it is therefore quite common to see them in the sky. The most recent of these was a UFO seen over Mexico - an event that has gone completely viral on the Internet. According to the Perú portal, a startling viral video on YouTube has been the source of much comment among cybernauts, and no explanation has been found for the phenomenon in the heavens.

It all started with a recording that showed the west of Mexico City. 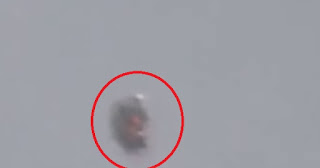 According to statements made by the La República website, events of this sort are commonplace on YouTube. However, this manifestation had something unusual. Unlike most cases, the alleged UFO engaged in unusual maneuvers in the sky, causing fear among the citizenry.

Some locals said that that it wasn't a spacecraft, but rather a colossal being, since upon using their zoom lenses, they could see something looking like legs, arms and even a head that moved strangely as the object remained aloft.

Users stated that this recording was among the strangest in relation with alleged UFO sightings.