Luis Burgos: A Fire on the Ground 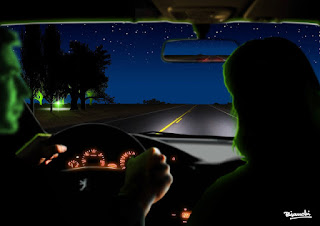 A Fire on the Ground
By Luis Burgos (FAO-ICOU)

Buenos Aires Provincial Route 36 is in the news again. The experiences recorded over so many decades by drivers, country people, tourists, residents, hunters and fishermen are innumerable. The region’s geography, much of it lonely, is peppered with all manner of encounters as we traverse the very heart of EL NIDO (The Nest). Small probes (diminutive luminous spheres) chasing car drivers, dozens of imprints found in its fields, frequent sightings of unidentified flying objects, lights emerging from streams, hills or cattle troughs, and an abundance of photographs serve to make up a considerable case history. And as a nod to the movie “A FIRE IN THE SKY”, which tells the abduction experience of Travis Walton in 1975 in Arizona (USA), we now move on to the specifics.

On this occasion, it was the turn for three FAO members to become direct witnesses to a strange phenomenon. Returning to the coast of Buenos Aires along Route 36 on a Sunday evening, after spending a weekend at the shore, is often tiresome, especially when we factor in exhaustion and the monotony of the trip, which can also become tense when facing a rush of drivers eager to reach their destination. A surprise, however, awaited us on the night of Sunday, March 11, 2018.

With Juan at the wheel and Lucia in the passenger’s seat, I was resting on the right side of the rear seat looking at the starry sky looking for something, as I always do when I’m not driving.

So it was that I was tracking “constant blinks” toward the shores of Rio de la Plata. One of them was an airliner following the route from Ezeiza Airport or Aeroparque, and the other – which flashed every ten to twelve seconds. It caught my attention and I looked at it fixedly, this time searching for LUCI (*), although this one was rather low to be our common friend, as it was between 15 and 20 degrees. Lucía’s voice suddenly rang out in the car compartment: “What was that?!” followed by Juan replying: “A light fell down!”

My eyes changed direction, but it was too late, since what they had seen was already over for me. My wristwatch said the time was 20:30 hours.

“We were driving along Route 36 after spending weekend fishing at Punta Rasa, right on the day before the start of high school classes. We know that many people wait until the last minute to return to their duties, so there was heavy traffic on the road to La Plata, something that always makes me concentrate fully on the road, even if I’m not at the wheel. After curve covered in dense trees and passing the entrance to Ferrari, I saw a bluish-green light that lit up slowly…like a dichromatic lamp. No sooner had it lit up did it go down, turning off before reaching the ground. The darkness and our speed kept me from ascertaining its size, but I can say that it wasn’t more than two meters overhead, some three meters from the edge of the road and between 200-300 meters away. All of this lasted between five and ten seconds. The left side of the road was covered in trees and I looked in that direction, hoping to find an explanation to what we just saw. Suddenly I saw the white light of a private home. I sought a mile marker to find out exactly where we were.”


Seconds later, I noticed a “little flame” burning near a light post in the area where the greenish blue light had been seen. I use this diminutive because it was a small fire on the grass. I instinctively thought it was an offering to the Gauchito Gil of the highways, but it wasn’t. (Note: Gauchito Gil is not officially recognized as a Christian saint, but many Catholics here do regard him as a reliable intercessor. Prayers and homages to him at his shrines regularly ask his protection, and he is regarded as a kind of Robin Hood figure who protects the poor and vulnerable. CR: Catholicsandcultures.org). On the other hand, with the grass as dry as it was, who would dare light a fire at night lest they cause a conflagration? Unless it was deliberate. Juan also saw this fleetingly, but Lucia did not. The rest of the strip was spent on questions and associations: What had they seen? Was the little fire associated with the mysterious light? All of this had happened in this 500 meter stretch separating the sighting of the enigmatic light from the little fire. The first thing that came to my mind was the incredible pursuit of the Labaronnie family in 2002 during the Gobernador Ugarte events: they were chased cross-country by a little flame! Perhaps there is no connection whatsoever, but that’s what instinct is like. Sometimes it plays tricks on us and sometimes it’s right on the mark. [Note: For more on the Gobernador Ugarte events, please visit http://ift.tt/2Gtgw6o and http://ift.tt/2tPDB0C] 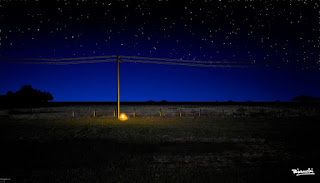 Like any ufologist who prides him/herself as a FIELD RESEARCHER and not as a long-distant OPINION-MAKER or COMPILER of cases and interviews, we returned to the site of the event with Lucia barely 17 hours after it occurred, at 13:30 hours on Monday on Route 36 to find the exact location of the incident. The 92 Kilometer marker near the detour to the town of Ferrari. This was the area in question. After some back and forth, we found the “little flame” from the previous evening turned into an ELLIPSOIDAL burn mark measuring 3 meters in diameter! In other words, the little fire kept burning and singed and considerable segment of dry grass close to the barbed wire fencing, at the foot of a light post. How it didn’t run up the pole and burn it, too, remains a mystery, as well as why it didn’t burn deeper beyond the wire fence. The compass pointed toward true north without any variations. The Geiger counter shed no anomalies, but the ERD detector yielded anomalous values, almost surely produced by the electric lines overhead. The neodymium magnet yielded no positive results in the search for IRON FILINGS in the charred soil. The area had several poles of attraction – wiring, nearby mills, antennae, cattle troughs and tree lines. 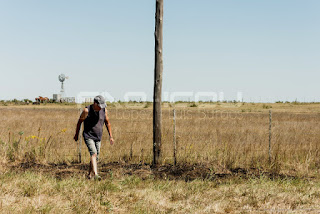 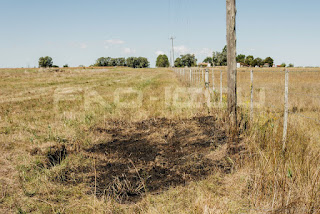 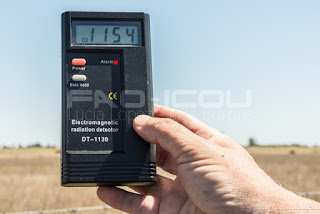 As a working hypothesis, our initial association was “luminous phenomenon – fire on the ground”, but we cannot be certain of this. Seeing this luminous source near a fire on the ground would not be the wisest relationship, unless one thing (the fire) had been caused by the other (the bluish green light). There is a coincidence of times and distances. The BURN MARK is not the kind left behind by a UFO when it lands or flies over a surface, but there are indeed cases of burns caused by the approach of such objects. We are reminded of the Londres (Catamarca) incident of 1982, in which a UFO caused a wind storm that set fire to several structures in the town, and why not? The strange and controversial oval “burn mark” of El Pajarillo in 1986.

As a consequence of this, it is important to highlight that there was no interruption in the electrical supply to the farm that occupied the space between when the light was seen, the car continued on its journey and the little fire was noticed.

AN UNSOLVED MYSTERY. Just another in the complex world of ufology. Just in the same way that Demetrio had finished listening to The Beatles’s Lucy in the Sky with Diamonds as we walked along a beach, only to be confronted by LUCI (*). On this occasion, a kilometer ahead of the sighting of the “little fire”, the sign outside an evangelical church on the roadside proclaimed: FIRE FROM ON HIGH…. 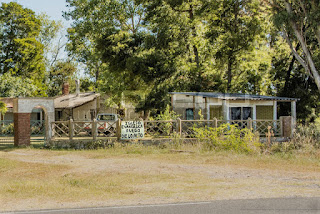 (*) LUCI is the name given by FAO-ICOU to a small point of light traveling at considerable altitude and following a satellite trajectory noticed in 1994 by researchers Alcides and Nelson Rocha Polanco, but also by Fabio Zerpa in 1986. Also described as a Luciérnaga ("Firefly"). THE FAO database places the first reliable sighting of this object as 17 February 1973, when it was seen by residents of La Matanza, Buenos Aires.

[Translation © 2018 S. Corrales, Institute of Hispanic Ufology, with thanks to Luis Burgos]