Argentina: Anomalous Object in the Skies of Argentina 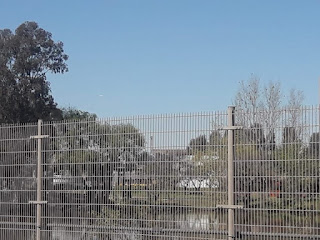 Argentina: Anomalous Object in the Skies of Argentina

A strange object flew over Argentinean territory on the morning of 26 September 2019.

It happened around 6:50 a.m. on Thursday the 26th. An unidentified flying object was seen from the city of Corrientes, and given the inablity to identify it, it prompted the witness to take a photograph. The object moved in a southerly direction. 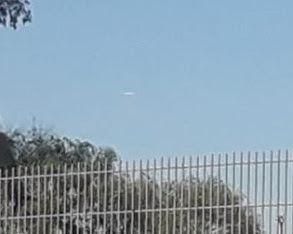 Several hours later, around 11:30 a.m. that same morning, the same object was seen in the Province of Buenos Aires, specificaly from the locality of Campana. According the witness's own words, "it was static, white in color, elongated like a cigar, was very high up and in an area that is normally not flown over by aircraft. I stopped to take the shot. [The object] was motionless. I went on my way and the trees got in the way of my sighting. I was unable to locate it later on." According to a preliminary analysis, the presence of aerostatic balloons that morning has been dismissed. The case remains in the research phase.
Inexplicata Podcasts covering items from UFO / paranormal history in Spain, Latin America and the Caribbean 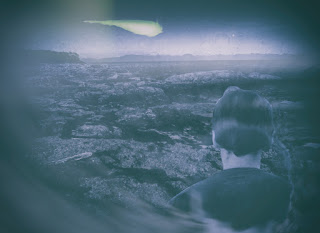 A strange luminous object fell on Wednesday (09.24.19) at night in a rural area of the island of Chiloé and was visible from Bariloche, according to residents.

The object's remnants caused fire outbreaks in the region, but these did not become extensive. Its nature remains unknown. 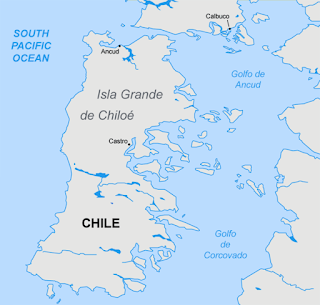 "Specifically, what happened was that between 20:15 and 20:30 hours, people witnessed the fall of a luminous object from the sky toward a rural area near the Dalcahaue Commune," he explained. "This element caused fire to break out simultaneously in different locations. Firefighters noted that there were odors not attributable to the burning of grass."

ONEMI ordered the sector to be placed under isolation "as a preventive measure to safeguard evidence."

When consulted by the radio show, Sergio Segade, a resident of Bariloche (Argentina) claimed having seen the object. "It isn't the first time I've seen an object fall, but this one caught my attention due to its color. I saw it from Paseo del Este, which is near the La Colina district, walking toward the Las Victorias district. I was with friends, and someone said: "Look, look!" and we looked up and saw it fall."

"It was greenish blue, changing hues. Once it fell behind the mountain a white wake was visible for a long time, some five minutes, before dissipating little by little. It fell at a 45 degree angle behind Cerro López," he explained.

Argentina: A UFO over the Promenade? 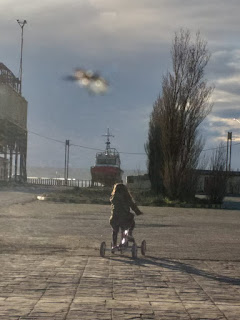 Argentina: A UFO over the Promenade?

A resident of Rio Gallegos visited the TiempoSur newsroom to furnish her account of what she saw in the afternoon as she strolled about with a child. She claimed having taken a strange photo on her cellphone.

This afternoon, the TiempoSur newsroom was visited by a townswoman who wanted to show an image that had captured her imagination. The photo was takin then this afternoon as she strolled along the city's coastal walkway. A small girl can be seen riding her bike on the promenade and above her, in the sky, are the lights that drew the woman's attention.

The townswoman was confused by the strange glow recorded on the phone and was unable to figure out what she had seen.
Inexplicata Podcasts covering items from UFO / paranormal history in Spain, Latin America and the Caribbean 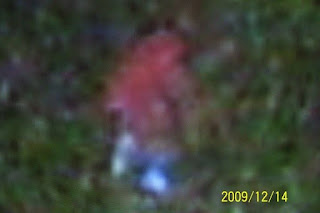 "Living some years ago in house in Hurlingham (a district of Buenos Aires - Ed.) I accidentally photographed something looking like a "little man" running across our garden. The photograph has been magnified repeatedly to enable visualization of the details. All the greenery represents the garden's grass, and then, viewing it in detail, we can see that something else appears at that site.

The body is clearly visible - even blue legs and a red hooded suit. Perhaps it merits analysis, but to us, this was a photographic capture of a 'gnome'.

Clearly, we are living with other presences vibrating in another frequency or dimension.

Spain: Concerning the Two UFOs Seen 42 Years Ago in Alicante 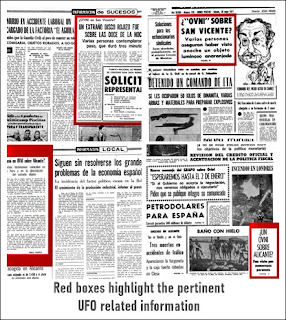 Spain: Concerning the Two UFOs Seen 42 Years Ago in Alicante

On 29 December 1976 and 27 May 1977, many residents of Alicante saw unidentified flying objects in the sky.

Neither of the cases of sightings over Alicante recorded in 1976 and 1977 appeared in the files declassified by the Spanish Ministry of Defense in 2016, but they were so widely-known that they went on to have a significant presence on the pages of INFORMACION among other print media.

The first event took place on 29 December 1976, with this newspaper running as a headline the next day: "A UFO over Alicante?", adding that "it was seen by many people."

The news item on page 5 bore the title: "Did a UFO Fly over Alicante", adding that many eyewitness accounts 'coincided on the time and description of the strange object. This is the full transcription of that information in an article by Pirula Arderius.

"Unidentified flying objects are news yet again. Despite the caution with which thse subjects have been dealt with lately in the news media, and despite the fact that the incident could be a prank associated with the date [NOTE - In Spanish-speaking countries, the equivalent of April Fools Day is December 28], we must put on display the accounts of a number of people, a member of our Newsroom among them, who claim having seen a strange object flying at high speed over Alicante at five minutes before 2 a.m. yesterday, Wednesday.

A resident from the Vistahermosa district was the one who furnished us with the most detail. He saw - at the indicated time and not very high in the air - a strange spherical object that gave off powerful green flashes. The light it irradiated was so strong that it illuminated the landscape perfectly with a greenish tinge, as though it was daybreak. The strange object passed by Vistahermosa, crossed over the capital and became lost behind an apparent cloud between Tabarca and Cape Santa Pola. It all happened in a matter of seconds.

The airport also received many calls, asking if the phenomenon had been identified in its vicinity. The technical team in charge of probing weather phenomena did not add further details. It appears that no one in the control tower paid any attention ither, and there was no radar to provide a technical account of the strange object's transit, which exceeded the speed of sound.

Moreover, Murcia's "Línea" newspaper published a sidebar informing that many people - particularly those driving along the highway, had also seen the phenomenon over the city around two o'clock in the morning, and that a broad area had been "illuminated as though it were daylight" in a radius of twenty or thirty kilometers, by their estimation. All description characteristics were also in agreement."

On Page 15, a headline proclaimed: "A Strange Red Disk Was Seen Around Midnight", with a subtitle adding that "several people witnessed the transit, which lasted three minutes."
Inexplicata Podcasts covering items from UFO / paranormal history in Spain, Latin America and the Caribbean 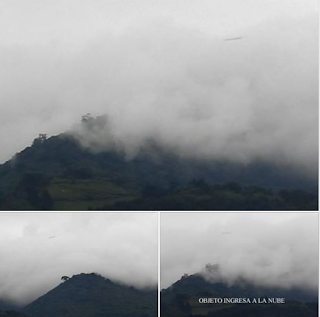 Spain: Is this a UFO?

Spain: Is this a UFO?

InformaValencia.com - Is this a rocket or an unidentified craft? The time was 20:30 hours on Tuesday, September 10. Ricardo Bayo, a resident of the Port of Sagunto, recorded the progress of the expected storm, the notorious and expected "gota fría" (The cold drop, literally. A weather phenomenon associated with the fall season in Spain).

Suddenly, something inexplicable appeared on the screen of his smartphone. A rocket can clearly be made out on the horizon. Part of its fuselage breaks off and rises up into the atmosphere at full speed.

Is it a UFO? Something related to the NASA presence in Morvedre? Is it part of a big screen production? What is it? 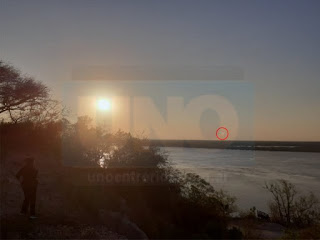 Unexpectedly, photographs and recordings becan to appear in the area showing strange objects in the sky, suggesting the possibility of unidentified flying objects (UFO).

The latest case known in the area took place in the locality of Curtiembre, Paraná Campaña.

What ocurred only a few days ago in Santa Fe should also be recalled. There was an analysis of the images that appeared over the bridge leading into the capital city of the neighboring province.

Something similar has now become known through a group of residents in the locality of Curtiembre in Paraná Campaña.

A fisherman sent the photo report to UNO in the middle of last week.

As he told UNO: "We were with my family at the shore, and whil I didn't see it at first, I took several photos, and I saw that strange light upon reviewing them."

"We were on the shore, in the area known as 'la subida de los animales'," he referenced, to indicate that every so often at that location, "strane objects are seen, particularly at night, which hang around for a while and mysteriously vanish."

Then man pointed out that the sighting occurred on the Santa Fe side, more specifically toward the Santa Rosa de Calchines area.

UNO consulted Mariano Peters of the Oro Verde observatory. The astronomer noted that from what appears in the photo 'there is the feeling that it's an image related to the sun reflecting off the Paraná River."

"It is normal for these reflections to appear in photos, and they turn into rather realistic images, but ultimately, they are not what they appear to be. A similar episode could be the case in the sighting of an image over the Santa Fe city bridge."