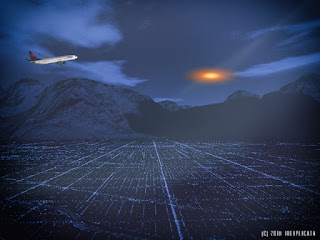 Like a giant snowball that grows exponentially, stories linked to the unknown and attributed to the runways of the airport at Tenerife (Canary Islands) tend to multiply, pulled along by the fine thread of collective memory, polluted by the small and large details of confabulation.

Among this hoard of tales we find those that have to do with unidentified objects, the strange lights that make themselves known in the heavens over La Laguna, and more specifically, directly over the airport. It has always been a challenge to find solid information to confirm the presence of a UFO - something that goes beyond "a friend told me" or "I was alone, but it was there."

If we add to the complexity of securing one or more eyewitness accounts the indisputable fact that we are talking about an area crisscrossed by airplanes, private planes and helicopters, it becomes an odious task that I personally find complicated, tedious and a pain in the neck. I have come across the odd note in this regard:

"A young photographer managed to take a long exposure UFO photo on June 11, 1975 while an aircraft landed at Los Rodeos airport (Tenerife, Canary Islands). Next to the airliner was a half-moon shaped object no one had noticed before. There is no radar information available for the aircraft." (Looculto.tk).

However, and to keep from coming across as obnoxious, there are other stories related to alleged UFO that have not left me unmoved, or at least have not caused my attention to wander off when I first hear them. So, among this hodgepodge of stories, I come across David O. Rodriguez, an amateur photographer, but whose work causes many self-proclaimed professionals to shudder.

David is what is commonly known as a "spotter" - a person whose pastime it is to spend hours and hours taking photos of airliners at airports or special areas during their delicate takeoff and landing maneuvers. For a few years, he would visit a well-known esplanade near the airport's Runway 30, an esplanade beyond the perimeter and which has been famous as one of the city's three major lovers' lanes...I mean, one of the three lovely places where couples can give in to their purest love.

Aside from the instinctive use given to the area, "spotters" gather here to tell interesting stories related to specific activity in the sky from that location. So let's go to what David was telling me one morning during a chat that dealt specifically with photography and applied technology, one of my great passions.

When I told him I was working on this this book, he remarked that nothing ever happened over the airport, he had seen a UFO over El Socorro - a populated area near the airport.

"On one occasion I was right under the tower (referring to a small tracking tower near Runway 30 and is in the aforementioned esplanade) waiting for the Air Europa flight to come in from Madrid. It must have been 9:15 at night when at the level of the horizon, looking toward El Socorro, we were able to see a bright light, white and blue in color, that struck me, because at times there are planes coming in through 12 and 30 at that time. With the exception of Air Europa and Iberia, no large aircraft should approach, much less at that location. I waited a while to see if the plane approached the airport, but the damned thing didn't move. It appeared to be over the sea, by Valle de Guerra, with a light that seemed increasingly bluer. It stayed there for about 10 minutes, motionless, until it was gone in a blink before I realized it. My companion said the object had vanished in place, but I didn't see it. It wasn't an airplane, I'm certain of that. I thought it could have been a helicopter on maneuvers, but...where did it go?"

Listening to David's story I was reminded of the popular Chinese lanterns that have become so popular in recent years, and which have become commonplace along the northern area of the island, particularly Puerto de la Cruz, 30 kilometers from the airport. Could it be one of these paper lamps? Is it possible that witnesses could see it at such a distance that it could be mistaken for the lights on a Boeing?

I supposed David had photos of the event. "I took some six or seven, but they're all black and the light source appears as a tiny dot of light...at light and so far away, it's a miracle."

As I write this, I am holding one of those images and I can state that all you can see is that. Nothing. However, I have no doubts about the eyewitness account, which I am sure is based on his considerable knowledge of aviation and above all, the knowledge of the area surrounding North Tenerife Airport. As long as one can be certain about what was seen over the area, it shall forevermore remain a UFO.

An additional note. In February 1995, a group of replacement soldiers from the artillery platoon of the San Francisco Base in La Laguna were engaged in maneuvers at that Los Rodeos military area, specifically on the premises nearest to the GAAL (Light Anti-Aircraft Artillery Group) hangars when two soldiers on a ground topography mission saw two yellow lights "the size of a foosball ball" fly swiftly to the right of their position in the dark, about a meter and a half over the surface and event cutting through an area of high vegetation.

These lights vanished toward the airport’s passenger terminal on the other side of the runways, but they were never seen to emerge from the high vegetation area. Hallucinations, lightning bugs, or a prank pulled by fellow soldiers?

[Translation (c) 2017 INEXPLICATA with thanks to Guillermo Giménez]