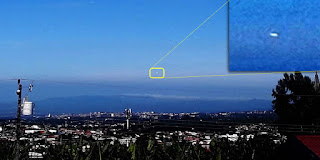 Independence Day morning was different in the skies over San José's Coronado District, when security guard Ingrid Herrera noticed an object flying over the area.

At 7:14 on 15 September 2018, Ingrid saw the disc-shaped object from her home, as can be attested by the photograph's EXIF information and the GPS data of the Samsung cellphone. The image was left intact.

Ingrid managed to take three photographs of an object which according to her eyewitness account did not move. It remained stationary without making any noise. After taking the third photograph, the object simply vanished.

[NOTE: The EXIF information and photos can be seen at https://ift.tt/2xo8sju]