Argentina: "This Could Be A Paranormal Case" 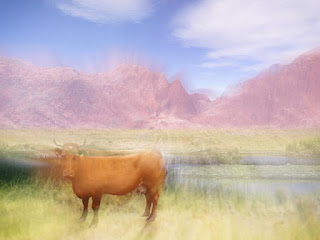 The situation is reaching historic proportions. The Justice department intervenes in an Argentinean cattle mutilation case. Statements made by Dr. Renzo Capellini of SENASA (National Food Safety and Quality Service).

Full text of the complaint filed with the police:

"I hereby make you aware that on this day at 10:30 hours, a formal complaint was made before the police department by citizen BAEZ, RAUL GUSTAVO, age 73, retired, ID Card xxxxxxxx, having residence in the Palermo district of the city of Villa Ojo de Agua, against PERSONS UNKNOWN, stating in his report that he is the owner of a property in Paraje La Totorilla, Dept. of Ojo de Agua, with a total of one hundred fifty-two head of cattle. Approximately fifteen days ago, it so happened that ten of these animals were found dead - eight cows, a heifer, a calf - and three of these were mutilated, missing their tongues and eyes and part of their reproductive system, the causes of their death being unknown. Along with his son MAURO BAEZ, a veterinarian, they performed surgery to examine and try to ascertain the causes of death, noting that no other animal such as crows, foxes, ants and/or any other carrion animal came close to the deceased; no blood was evident, no footprints or tire tracks were evident in the area either. Prosecutor Dr. Julio Vidal was advised of the situation, ordering a summary investigation aimed at determining the causes of death of the animals reported in this instance, asking SENASA be appraised in order that it may present a detailed report on the alleged causes of death. An administrative record and visual inspection is to be carried. At 17:00 Commissioner Guzman Baez and personnel from the Criminalistics section, along with veterinarian Renzo Capellini, headed to the site to comply with the order issued by the office of the prosecutor. They interviewed Mr. ROQUE MENDOZA, of legal age, domiciled at Paraje La Totorilla, Dept. of Ojo de Agua, who said that approximately fifteen days ago, when rounding up the animals in the wilderness, he found that ten of them were dead and four were missing their tongues and had incisions in their genital area (anus) and had no blood. Citizen Baez, owner of the bovines, was apprised of this. He also learned that his neighbors, ACOSTA TOMAS FIDEL and VILLARRUEL FLORENCIO had also suffered the loss of bovines, some of which were mutilated. It is noted that veterinarian Capellini of SENASA was unable to extract specimens for lab analysis due to the level of decomposition of the animals. He stated having never seen mutilations of that sort and that this could be a paranormal case (textual), noting that incisions of this sort are only made with a laser scalpel, and that he would draft a report as soon as possible."

[Note: This is the first time that an officer of SENASA acknowledges the possibility of a "paranormal" explanation to a cattle mutilation.]