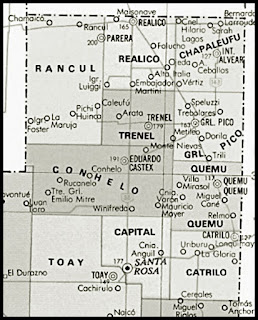 From Quemú Quemú, Agustoni, Trenel it was possible to see a strange light that colored the sky a hue that oscilated between sky blue and green. It was possible to see the phenomenon for some five seconds. It could be a meteorite or even space junk, which cause this kind of luminosity when entering the atmosphere.

A family from General Pico driving in their car along provincial route 1 between [the towns] of Miguel Cané and Quemú Quemú said that around 20:209 hours, they saw a "blue light" that lit up the entire road and surrounding fields.

Elisabet Gallo, 34, her husband Cristian Albornoz,34, and their children, ages 14 and 3 respectively, were driving from Cané to Pico in a Ford Fiesta. "We were heading back to Pico when on the approach to Quemú, in a wide curve, everything lit up all of a sudden," said Elisabet.

The light lasted some five seconds, by her calculations. "It didn't give us time to take photos or record it with our cellphones," she said. "It was impressive, we were stunned."

They weren't alone: their parents claimed seeing a similar light between Trilí and Quemú.

The same phenomenon was also witnessed by former councilman Guillermo García, who was between Quemú and Agustoni. "It was like a lightning bolt. The heavens went sky blue," he said. Yolanda Mora of Quemú offered a similar report, as did Griselda Cuadrado, who saw the same from the town of Agustoni.

[A follow-up to the compelling newspaper article appeared days later with the following heading:
PARANORMAL PHENOMENON: The story of a family from Pico with the strange blue light. "I couldn't steer my car. It malfunctioned 70 kilometers after the light appeared. The article included an interview with the protagonists of this experience which later appeared on YouTube. INEXPLICATA offers an English transcription of their experience below: 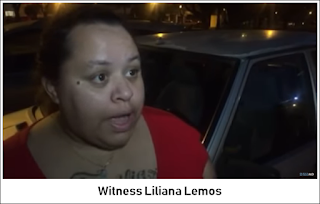