The Ecuadoran "War of the Worlds" Transmission Remembered 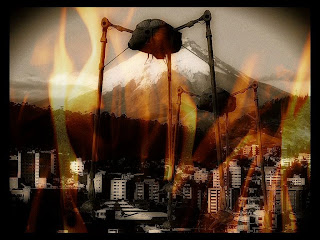 The Ecuadoran "War of the Worlds" Transmission Remembered

Every October 30th, UFO and science fiction enthusiasts alike remember Orson Welles' history-making broadcast of H.G. Wells's War of the Worlds on the Mercury Theater of the Air and the resulting confusion caused by the alleged Martian invasion - a panic that has been called into question recently by skeptics, but whose legacy will forever loom large. Large enough, a decade after its transmission, to have caused true panic and death in South America.

"We are interrupting our transmission to make you aware of the latest news: our reporters and colleagues tell us the city of Latacunga - two and a half hours distant from Quito - is being invaded by strange lights in the sky and the city is being destroyed...people are running through the streets and fire can be seen everywhere, infantry brigades have been destroyed...the lights are headed for Quito, there are many dead and there is devastation everywhere. It looks like an atomic war."

Thus began the broadcast of Orson Welles' War of the Worlds in Spanish - "La Guerra de los Mundos" - broadcast on 12 February 1949 at 7 pm on Radio Quito, one of the Ecuadoran capital's most popular stations, interrupting a live transmission of a popular music show. Directed by Leonardo Páez, the transmission caused a true sensation in the South American country.

The musical show - a duet by singers Potolo Valencia and Gonzalo Benítez - was interrupted after only one song. An announcer stated that a "flying object" had been seen over the Galapagos Islands, interrupting the show yet again to advise listeners that a flying saucer had landed in the Cotocollao district on the outskirts of the nation's capital.

"We are again interrupting our programing to inform our listeners that we are at war. Strange lights are arriving and attacking northern Quito at Cotocollao. Spinning discs can be seen along with strange hostile beams who are destroying it all. There is fire everywhere, as well casualties. Ladies and gentlemen, we are at war!"

Páez's skilled team of voice actors managed to imitate the voices of government ministers and even the city's mayor. Sound effects added to the realism and the sense of impending doom that Welles had conveyed so well in 1938. Four years into the nuclear age, mankind was losing its first encounter with extraterrestrial invaders. As if this wasn't enough, alleged phone calls from radio stations in cities like Cuenca and Guayaquil were coming in, describing the perils faced by the country from "a cloud of toxic fumes" slowly spreading over the Andean foothills.

The La Guerra de los Mundos broadcast was so successful that it caused a mobilization of the city police and local military barracks. However, these same forces - upon learning of the "hoax" - retreated to quarters without hesitation, irritated at the notion of having succumbed to a radio stunt that was tantamount to a prank. 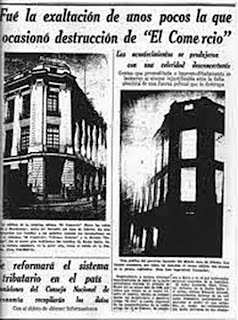 The sudden and hopeless news resulted in churches being filled. It wasn't long before the terrified citizenry learned that this false alarm was nothing more that radio show, and decided to take revenge on the broadcasting facility. According to sources from the time, busloads of enraged locals began arriving at Radio Quito building in the city's downtown area. A shower of bricks and debris rained against the building's facade, but mere vandalism would not assuage the hate welling in the hearts of the Quiteños. The building's lobby and first floor were set on fire, and being that the building was shared by El Comercio newspaper, tons of newsprint served to stoke the blaze. Flames devoured the structure, prompting Leopoldo Páez and his actors to make an improvised escape from their studio, jumping to the roof of a neighboring structure. Not all of them survived. Damage to the radio station, the building and the newspaper were estimated at 2 million old Sucres ($350,000 dollars at the current exchange) with a total of twenty dead, although figures vary from one report to another. The fact remains that El Comercio did not publish an issue on February 13, 1949 due to the total loss of its facilities. In August 2010, Radio Quito celebrated its 70th year on the air with a remembrance of all the highlights of its existence,including the sad events of 1949.

Four years earlier, a radio station in Santiago de Chile had broadcast its own adaptation of "La Guerra de los Mundos" with similar reports. Rumor has it that a regional governor had even tried to mobilize his forces to fight the "alien menace".