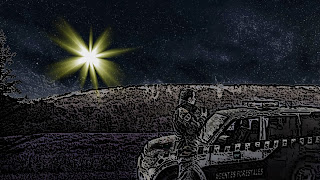 The mountainous area located between the communities of Aznalcollar - El Alamo - El Castillo de las Guardas, amid the Sierra Morena, corresponds to a vast woodland area that extends some 6000 hectares (14000 acres) belonging to the Provincial Deputation of Seville. The site is some 40 kilometers distant from this city, between 6 degrees longitude west and 37'40 degrees latitude west, approximately. The landscape there is beautiful and wild, filled with pine and eucalyptus trees, streams, hills and fords. This marvel of nature is monitored by forest rangers who look after it with great care, as it is our common heritage.

It was precisely one of these forest rangers who witnessed the phenomenon described below and came across the probable ground imprints left behind by the UFO.

The researchers were warmly welcomed, despite certain hesitation on the part of the lead ranger, which quickly vanished in the light of the seriousness of our investigation and arguments. He made available to us a Land Rover to survey the site of the alleged landing, which was in the wilderness. We would like to extend our thanks to the forestal authorities for their assistance in our task and for their services to ufology.

The witness is a serious person who seemed very well balanced to us and who knows the entire area like the palm of his hand. He told us that while working

nights, he was able to find the distance to the nearest road, or if there was a spring, an abandoned house or a pine of certain characteristics in pitch

darkness -- all of this in a 6000 hectare region. His seriousness was proven because when he made a sighting, he did not disclose to anyone - except his wife.

His co-workers and friends were startled when he spoke of the event in our presence. There is no question that the witness preferred to avoid the pranks he

would have been subjected to after making such a statement, and chose to keep silent until our arrival. Thus, he rejects notoriety, and it was necessary to assure him that his statements would not become a source of trouble to him and he would not be subject to reprisals. Quite the contrary, he was performing a great service for research.

Mr. Luque was attending to some bees he keeps in the middle of the woodland area are around 8 o'clock at night. As he explained, these insects do not leave their honeycombs during bad weather, and he makes sure to provide them with sustenance, consisting of little cups of honey.

The temperature was low. There were some clouds in the sky and the Moon was not yet out.

As it had become dark, the witness decided to abandon the task, unable to see how he could continue in the darkness. He went looking for his motorcycle to return home, and when he was about to start it, became aware of a very bright star moving from left to right in an arc toward the north. He thought it might be a meteorite and paid it no further attention. As he started his motorcycle, he looked at the "star" and saw that it was descending vertically, touching the top of a nearby hill, approximately 1 kilometer distant.

The "star" then began to rise - also vertically - until it placed itself some 200-300 meters over the hill. Mr. Luque corrected his initial impression and realized it couldn't be a meteorite. The "star" repeated its up-and-down motion once again, slowly. No sound could be heard and Mr. Luque supposes that if there had been one, it would have reached him, as silence reigns over that location.

According to the witness's description, the phenomenon was round and with the colors of the rainbow. At its center was a dark - but not black - mass, enveloped by three rings around it - dark orange, blue and dark green in color. When it "landed" on the hilltop, known to the Guards as "Alto del Cortafuegos" (Firebreak Heights), the rings faded slowly until they vanished. As this was the only source of light in the darkness, the witness lost sight of the phenomenon when it turned off, and did not see it again. The sighting had a total duration of 4 minutes and the object’s apparent diameter was smaller than that of the full moon.

Landing Traces: As we have noted above, Mr. Luque knows the land perfectly and thought that if something had landed, it could have only done so atop Alto del Cortafuegos, which was somewhat free of vegetation. Three days later, when his duties allowed it, he decided to visit the site in question to see if any traces could be found. It hadn't rained for three days and he was certain to find some traces that would confirm his sighting.

The area is located approximately east of Km 11 of the Aznalcollar-El Alamo road, accessible only on foot or in the all-terrain vehicle owned by the forest rangers.

Upon reaching Alto del Cortafuegos, the witness conducted a thorough search of the entire heights. Given his profession and knowledge of the field, trees and terrain, he was able to see something he found unnatural only scant meters from a pine tree: a crushed cork oak shoot. An animal could not have crushed it entirely and in such a way, thought Mr. Luque. It would have taken a greater weight and a size larger than an animal's paw. Impossible for it to have be a car,and the forest rangers had not been there since the previous summer.

Looking closely at the plant, he saw it was wilted, as though singed, which was illogical given the rains of recent weeks. The witness could only think that the tree shoot had been exposed to a high amount of heat, and told us as much.

He saw something else unusual in the terrain surrounding the cork oak shoot: rocks appeared to have been swept into a 2 meter diameter circle. Within this

circle, the ground appeared more leveled, flatter and thicker stones had been thrown to the edges of the circle. This was inconsistent, as stones were piled all in front and behind the circle, and the central and side-ridges left behind by the tires of the Land Rovers were still evident. However, there was nothing like it inside the circle. This, perhaps, was not proof positive of a landing, but it did not jibe with the rest of the surrounding terrain.

During our visit - 20 days after the event - we noticed some of the above, bearing in mind that the rains of recent days must have altered the physiognomy of the circle in question. We collected some samples of the cork oak shoot and the terrain, which we submitted for analysis. Should any noteworthy results emerge, we will make it immediately known.

Conclusion: At the end of a lengthy conversation with the witness, he told us that a few months earlier, around 12 midnight, he saw a reddish ball similar to the full moon traveling from south to northwest and vanishing in the distance. Given the nature of his job and the area he works in, often at night, we begged Mr. Luque to please make us aware of any strange sightings so we could look into them immediately. We took our leave from him, having recruited another collaborator for this thrilling and disconcerting endeavor that is ufology.