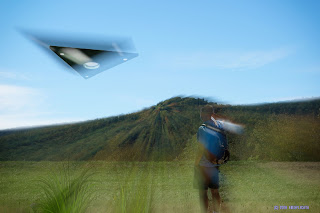 Ezequiel Alvarez, chief of the local volunteer firefighters of that community, managed to capture strange lights that turn on and off and then merge on his own cellphone. One appears at first and is joined by two more on the scene. "At 21:30 hours on Monday we received a call advising us of the presence of two strange lights on the banks of the Rosario River. We headed there and had a shocking experience."

In the recording, the Rosario fire chief explains how red lights flashed on and off from the object. Their intensity, color and trajectory was variable.

"We made signals at them with a flashlight and they replied," he stated. With full conviction and certainty, Chief Alvarez went a step further and added that extraterrestrials "are members of the Pleiadan civilization" (sic). He bases this belief on the fact that "they are in contact with Alejandro Godoy, a local resident who is also a UFO buff, and was told that two craft were in the vicinity of the Rosario River and that he should head for the site. That's how he was able to tell me about what happened later on," Alvarez explained.

"They choose whom they want to make contact with in these displays, regardless of the individual's social, cultural or religious status. Godoy is much involved with phenomena of this type," said Alvarez. "I went to the site immediately and felt great excitement. I have had many contact experiences with extraterrestrial craft, but this is the first time that a video has been recorded in which they can clearly be seen to greet us. We were in material contact with the ship," he added. 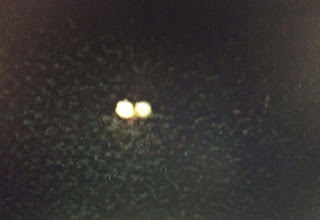 In his story, Alvarez claimed that a light was visible at first, and then others began to come in and out of that central point. "What happened in the Rosario River area was startling, because it was only two kilometers from the urban zone. This was a preparation of sorts. They were telling us that they were at our doorstep and knocking at the door. I have no question that they'll continue to materialize."

"What's happening to me is wonderful. But I think it's also a warning to humanity due to the wars and the use of nuclear and chemical weaponry," he observed. Regarding the sighting on the Rosario River area, he explained that the craft were over some trees, some fifteen meters tall. "They have allowed themselves to be recorded and documented in order that everyone may be aware of this display and eyewitness testimony."

Alvarez said there were many UFO sightings in the Rosario de la Frontera region. "There are many paranormal issues we can discuss. I can tell you there are various civilizations operating in Rosario de la Frontera. There are documented cases in the area of Duraznito, where locals and farmers saw them on the mountains," said the volunteer fire chief.

It is believed that the Pleiadans are a collective of entities from the seven stars we have come to know as the Pleiades, says the El Tribuno de Salta newspaper on its website. UFO theorists say they are our ancestors, as they contributed their DNA to bring about the human race. For that reason they are known as our seminal group. Their biology is like our own, although their technical and spiritual development is greater than Earth's. Pleiadans have their own spiritual masters who have in turn offered to contribute to our own evolution. Their preferred way of doing so is by sharing their knowledge, as they consider "the light" to be information and "the dark" to be the absence of information.

[Translation (c) 2018 S. Corrales, Institute of Hispanic Ufology, with thanks to Marcelo Metayer]