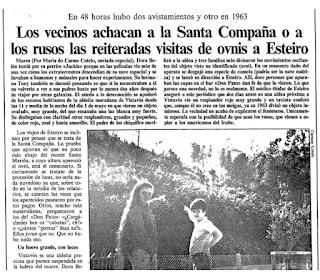 A triangular UFO may have flown over the town of Muros 33 years ago.

This, at least, is the belief held by those who witnessed a strange object in early May 1987. The witnesses lived in the heart of Vistavós, described as a lovely village on a hillside. The family of Domingo Beiro, his wife Belén, and his children Dora and Tony were the first to witness, near their home, the strange object issuing a potent white light, although also emitting red, blue and yellow flashes. They alerted their neighbors in the awareness that no one would believe them, and they all saw something resembling 'a sort of comet' launched toward the town of Esteiro.

The story from Vistavós was confirmed from Esteiro. Several people in the outdoor seats of the Don Pato café allegedly witnessed a bright flash they first attributed to a fire. As minutes went by, they saw a triangular object suspended before their eyes for 10 to 15 seconds. Some of them event went out the next day looking for traces in Pino de Val, Paxareiras and Abelleira without finding a trace.

A doctor from Esteiro and his two companions also saw a flash of light in the sky over Pando, near Vistavós. The object, measuring 15 meters in diameter, moved away swiftly.

Some residents of Muros ascribed the phenomenon to the "Santa Compaña" or Russian spies.