Argentina: Something Fell from the Sky in Carhué 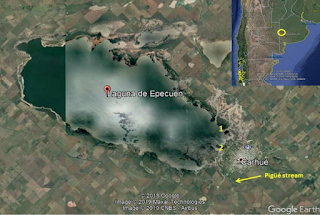 Argentina: Something Fell from the Sky in Carhué

The fall or alleged descent of a strange object in the province of Buenos Aires became known thanks to local residents and truck drivers transiting through the area and who contacted the Centro de Estudios UFO (CEUFO). The episode took place in the early hours of last Saturday, May 9, to the north of the locality of Carhué. Witnesses allegedly saw "a shadow descending very quickly, which then made an abrupt turn toward Lake Epecuén."

Vehicles with a police escort were seen arriving shortly after at the edge of the lake and near the place where the "shadow" had purportedly fallen. A truck driver passing through the area said: "I finally made it to Carhué after multiple traffic checkpoints. They had already cautioned me to try to stop as little as possible, so I have everything in the truck with me.

"I stopped in Carhué for a while by the train tracks to have something to eat," he added, stressing that "it was very dark, and I suddenly saw a fleet of vehicles coming with blue lights. Not sure if they were police of Gendarmerie, but they were going fast," he said. After dinner: "I continued my trip, but just 15 kilometers short of Carhué, the road was blocked and they asked me to wait."

Two hours later "they allowed me to continue, and where the road comes near the lake, I could see a lot of movement not only on the shore, but some 2 kilometers into the lake itself. I stopped for a minute to check whether something could be seen, but a guy in uniform appeared out of nowhere and urged me to keep going."

Local police neither confirmed nor denied the episode. Given the lockdown in which the country finds itself, it is impossible to travel to survey the area. But at this state of affairs, and based on the accounts of people who saw the vehicles guarded by police units, we can say that "something did fall" there.

If so, this brings to mind the episode recorded on September 26, 2011 in Monte Grande, where something "fell from the sky" and caused the deaths of two people, leaving behind a large crater and prompting an intervention by police and fire-fighting units, as well as the presence of a convoy of civilian personnel that did not speak Spanish. They loaded "something" into one of the vehicles and left. The official explanation given to the event was that a "pizza oven" had exploded. This explanation convinced no one, much less local residents who witnessed the phenomenon.