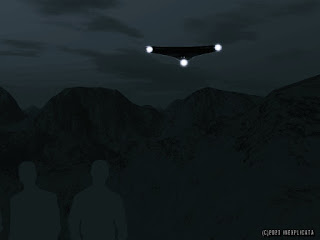 Fabrice Le Lous, a journalist for the La Nación newspaper, had a fascinating UFO sighting in 2012. He saw the device at a relative's home in Jugigalpa, Chontales, in neighboring Nicaragua.

The sighting occurred on the evening of Friday, 22 June and Saturday, 23 June of that year. According to Lous, he and a cousin witnessed a black triangular object for at least 20 seconds. It had lights on each of its three tips.

Fabrice's sighting was published in La Nacion this Sunday (3 May 2020) in the Sunday supplement, describing the experience in detail. La Teja got in touch with him over WhatsApp to discuss the experience in greater detail.

Fabrice says that he lived in Managua and in those years, he and his cousin Gerardo would go to Juigalpa, where his relatives lived, to spend the weekend.

"For a few months we had grown accustomed to looking at the sky through a refractor telescope. My cousin was a medical student was was more enthusiastic about scanning the night sky, but I always accompanied him. He would track down the stars we'd be looking at and I was amazed to see them."

"We spent a few minutes in the wide back yard waiting for the skies to clear to use the telescope again, but around 12:40 a.m. we decided to return home.

"My cousin went to put the telescope away. He took a bit longer than usual, and suddenly I heard him calling me, looking at something in the distance. I didn't go immediately, thinking it might be a prank, but then he began shouting, anxiously. I went over and looked in the direction he was pointing to.

"Can you see that?" he asked, excitedly.

At a distance, but relatively low (lower than the clouds) there was a black triangle flying silently over the skies of Juigalpa.

"It was a black triangle with orange lights, dim ones, at its tips. Three lights. The object flew hither and yon at high speed and made sudden stops before changing course in a different direction, very quickly. We could only hear a gentle rustling of trees. The triangle crossed the skies noiselessly. The sighting, which seemed magical to me at the time, lasted 20 to 30 seconds, but it seemed like hours to me.

"After a few seconds of apparently distant, calm flight, the triangle stationed itself more or less directly above us, becoming larger in a matter of seconds. Did it approach us? I don't know, but that was the impression I had. The moment it increased in size, we took off running to the house with quickened pulse rates," says Fabrice, who was 22 at the time.

The experience distressed both youths for some time and prompted them to seek information online, making them realize that the were not the only ones to witness such objects.

When asked if he believed in extraterrestrials, Fabrice, now 29, remarked that there's no way of proving it, but he thinks humans share the universe with other beings. To him, there must be intelligent life on other worlds.

"I would like to have the experience all over again, and as I said, the sighting experience was shocking and filled me with a bit of fear, reading and seeing documents on the Internet. It's not a good memory, but if I could relive something so odd again, I'd like to be able to out of sheer curiosity. I now know more about these phenomena than in 2012.

"It frightened me because the Internet has all manner of reports, FBI and CIA documents in their websites that corroborate these sightings worldwide for years. All of that, joined to the black triangle sighting, was an information overload that caused me insomnia and distressed for at least three years.

Fabrice remarked that they returned to the back yard every week for at least three years, but nothing similar ever happened again.