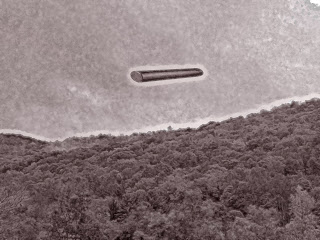 CARACAS - March 22, 2019. An unidentified flying object of considerable dimensions, elongated and luminous, was photographed by a young man from Zulia at the La Puerta sector, Municipality of Valera, State of Trujillo, after 5:00 o'clock in the afternoon on Saturday, February 16.

According to the story told by Friman Rodriguez, the event occurred as he and his cousin drove in a vehicle along the Pan American Highway, also known as Troncal 1, which links the southern reaches of the state of Zulia with the states of Mérida and Trujillo.

When interviewed by journalist Hector Escalante, he said that they were driving from Cabimas to the neighboring state that day with the intention of staying, but after discovering that the power supply was failing and there was a blackout in the area, they chose to return.

He said that upon returning home, he noticed a light in the sky some distance away that intrigued him. "I didn't pay much attention at first, thinking it was a reflection of the sun, but suddenly I realized that the sun was to the left, and much farther below."

Immediately, adds the witness, "the light began moving in a zig-zag fashion," which prompted them to take out their cellphones to document the scene. "I called to my cousin, who was asleep, and said: 'start recording!' he began recording while I took the photos."

After having moved, the artifact was completely exposed. It descended somewhat and hung over some scrub vegetation, but finding it impossible to remain immobile for much longer, he said, and they were forced to keep driving, losing it from sight. 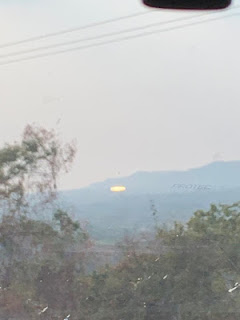 Rodríguez pointed out that while they were not far from the place where the UFO apparently landed, he preferred not to approach it. "I was happy to have recorded it and kept going. I wasn't too sure about going back and looking at something that could have an uncertain outcome."

According to the witness, everything appeared to be normal around him, except for the temperature: "It was excessively hot that day, and one leaves Zulia for La Puerta to catch some fresh air (...). What was I going to do in Trujillo with that heat, and moreover without light? That's why I returned."

His cousin experienced a similar complaint. Despite having slept for many hours, he found it necessary to go to a doctor due to a painful headache, explained the teenager, who dismissed the likelihood that the journey had caused the malady. "We were traveling in a new, very comfortable pickup truck."

Friman doesn't feel special, but he does feel fortunate. He states that while it’s the first time that he has seen an event of this nature, it is not foreign to him, much less unknown, as his father also claims having seen very similar artifacts on two separate occasions.

The characteristics of the site also provide food for thought. La Puerta is a tourist community in the Venezuelan Andes that covers several rivers and mountains in its eighty-four square kilometer surface, that is to say, water and vegetation, two elements that are always present in most Venezuelan UFO sightings.

Yet perhaps the most critical factor is the coincidence of the phenomenon's appearance with the interruption of the electric service, given that there are similar cases documented - even recent ones, like the one in La Lorena, State of Bolivar, where witnesses observed unusual light displays and subsequently found strange impressions on the ground.

[Translation (c) 2019 S. Corrales, IHU with thanks to Héctor Escalante]