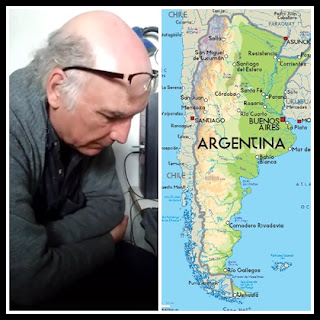 Burgos: […] the president you’re referring to is Jimmy Carter. Who told the media in 1976 that he had seen a UFO in his native Georgia. Well, the story was subsequently debunked, some say it was a cover up, but evidently, for example, we [in Argentina] around the 1960s witnessed major mobilizations by the three branches of the armed forces, particularly the Argentinean Navy, which was able to detect and pursue Unidentified Submarine Objects. USOs …witnessed by the crew complement and officers. Unidentified Submarine Objects in the Argentinean Sea. This even led to some presidents in office at the time such as Juan Carlos Onganía in 1966, President Ilía in the early 1960s to mobilize – through the Ministry of Defense – deployments aimed at the detection of this phenomenon, which they considered to be intruder submarines, while it was subsequently ascertained that they bore no relation whatsoever with any submarine, neither friendly nor hostile, that is to say, from abroad.

Interviewer: Listen, what hopes do you have with regard to this phenomenon? Should we continue making observations, because the Earth is too polluted, and they’ve come to take us to other worlds. What’s your idea about researching this? What’s your motivation to study this, and place so much faith in this regard?

Burgos: Well, on the whole, a researcher looks into what other people have seen. Today, many researchers have been lucky to witness a UFO phenomenon with their own eyes. I went from the year 1969 to 1979 without ever seeing a UFO, ten years of looking to the subject without having seen a thing, and from 1979 to this day I’ve witnessed UFO phenomena on eight different occasions thanks to the night watches we organize, our nocturnal field research, when we set out to find out a case in which the phenomenon has been occurring. We have no aim in particular, we are not contactees, nor do we receive messages. It just so happened that we were able to witness this UFO phenomenon, right? I’ve always said that if UFOs did not exist, why then have I come across, over the past fifty years, with so many government agencies? In other words, we have been investigating the same case alongside the police, aeronautical police, the air force, the gendarmerie, the prefecture, in the same field in a given province in Argentina, that is to say, the two of us engaging in the same research, the difference being that the government agency does not make its results public and we are the first to do so. In other words, if this phenomenon did not exist, I can’t imagine why we’ve crossed paths with these people so often.

Interviewer: So they can’t admit it?

Burgos: Of course, they can’t because they don’t want to, and there is evidently an open secret that nothing should be said. Not only here in Argentina, but also in a large part of South America, in other words, countries in which the United States has considerable influence, for example, Argentinean airspace is covered by North America. Should a strange object fall here, we’ll reach the site only to find it has already been cordoned off and access is denied.