Argentina: UFO Sighting in the Mountains of Mendoza 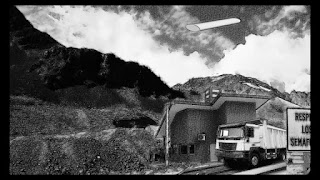 Argentina: UFO Sighting in the Mountains of Mendoza

On January 5, 2019, we became aware of an unidentified flying object (UFO) sighting in the locality of Punta de Vacas (Department of Las Heras) in the high mountain area of Mendoza, thanks to Ing. Ariel Godoy, memeber of the Café Ufologico de Mendoza and a collaborating member of CEFORA (Comisión para el Estudio del Fenómeno OVNI de la República Argentina).

The main witness in this case is Leonardo Escudero, 43, a traffic control employee in Punta de Vacas, who mans the weight and size scales for trucks that are heading to and returning from the neighboring Republic of Chile.

He told us that his colleague, Luciana Ibaceta, 27, was on the road arranging the entry of trucks while he remained within the scale office doing his job. Around 10:50, Ibaceta called him on the two-way radio to ask him if he could believe she was seeing a UFO. He stepped out of the office, saw it, and immediately entered the office once more to reach for his cellphone and use the Flightradar24 app to ascertain that no flights were in the vicinity, as this is a corridor customarily employed by commercial airlines, located over Highway No. 7. No known flight was recorded.

Ibaceta's sighting lasted some 30 seconds while Escudero was able to see it for some 15 seconds until it vanished behind the mountains. Escudero ran across the trucking yard in an effort to follow the trajectory of the object with negative results. The object did not move in a straight line, but rather an ellipse, and its shape was that of half a cigarette, white in color. It was clearly visible to both Ibaceta and Escudero, as they both wore anti-glare sunglasses. Escudero noted that when aircraft fly over the area, their tails, wings and colors are clearly visible, but this cylindrical object was completely white. He couldn't estimate its altitude, although believes it to have been considerable, and its approximate size would have been - as a minimum - some 20 meters (65 ft) long by 5 to 8 meters (16-26 ft) tall.

The sky was completely clear and cloudless, Escudero added. This allowed them to see the object in detail. No turbine or motor sounds could be heard, nor gas or smoke emissions.

Furthermore, Escudero added this was not the first time something similar had happened to them. Both experienced a similar occurence last summer. He recalled that Mendoza's Diario UNO hard reported that two similar objects had been photographed in Viña del Mar (Chile) the day after that sighting.