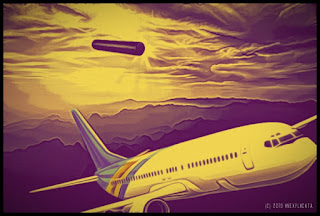 Civil aviation Colonel A.C., with Captain Carlos S. as his co-pilot, faced an unusual experience on February 14, 1967. It was possibly one of the first in UFO history in which an airliner crew and its commercial vehicle faced the mid-air collision.

Everything was normal that morning during the takeoff of an AVIATECA DC-4. The scheduled route was from the La Aurora International Airport in the Guatemalan capital to Benito Juarez airport in Mexico City.

Conditions were relatively good, as is customary for that time of year in the tropics. The propeller-driven aircraft was halfway through its itinerary and flying over the Mexican state of Oaxaca. Suddenly, Colonel A.C. saw a black, glass-shaped object right in front of his airliner’s bow. His co-pilot became nervous, even frightened. As the fine professional aviator he was, the colonel made a sudden turn and executed “raindrop maneuver”, in his words, to make sure what was actually there.

“We pilots are quite used to see things flying, even pieces of paper, at elevations of thousands of feet, but this was nothing known,” he said in an interview with Tele Sistema Mexicano, Chanel 2.

Colonel A.C. only held two interviews regarding his experience. One of them for Mexican television with Lic. Pedro Ferriz and another with Guatemalan broadcaster Cesar Romero of Channel 3. His interview in Mexico, matter of fact, was nearly two hours long.

In a private conversation with this author he said he would no longer speak publicly of the matter.

Encounters with the unknown involved another two Guatemalan pilots on a different route. Aviation pilots Oscar Ruiz M. and Julio A. Peña were heading toward Miami, Florida, over the Atlantic Ocean at 12,000 feet. Conditions were clear and with only a few clouds. Suddenly, at the two o’clock position (in the language employed by aviators to locate a direction according to an imaginary clock) they were able to see what looked like a sort of silver dirigible. “It was immense and clearly reflected the light of the sun,” said one of them. “We never lost sight of it. It was always there, apparently at our same speed. It vanished amid the clouds. It must have been the size of three or four commercial airliners together. It appeared to be piloted at tremendous speed.”

Col. Antonio B., Director of Civil Aeronautics in several instances, confessed having received countless reports from pilots in Guatemala who encountered the unknown. He himself had witnessed a glowing orange light that split in two – horizontally – over the department of El Petén in the northern reaches of the republic. “It was as if two vessels had taken off in different directions in the clear night through which they sailed.” He likewise told me how during his training period at a U.S. air base, firing at a given star during a training mission, one of these selected targets suddenly moved away at prodigious speed.”

The most recent encounter between airliners and UFOs in Guatemala is the case known as “Flight 510”, of which we have a tape recording of the exchange between a 767 pilot and the control tower at the La Aurora International Airport. The recording reflects the drama involving a crew that faced an unidentified flying object in front of its craft for 110 miles. But we will leave this case for a future article.

[Translation © S. Corrales IHU with thanks to Alfonso Salazar]