Argentina: A UFO Over Berisso? 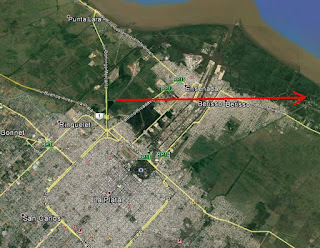 Argentina: A UFO Over Berisso?

Luis Burgos writes: After 23:00 hours last night, the cloud-covered sky began to clear in several areas of the province. At about 23:45 hours, with the sky somewhat cloudy again, Juan Naumovich, a resident of downtown Berisso (Buenos Aires) went to his backyard to witness, with astonishment, the transit of a flying object flying in a straight line from west to east, that is to say, toward Rio de la Plata. The artifact, with red, yellow and white lights, was flying at a moderate speed and average altitude, resembling "a rugby ball" seen at a distance. The sighting held his attention for one minute until it vanished from sight. It is very likely that it was seen from other locations in Buenos Aires. The transit of the International Space Station (ISS) and IRIDIUM satellites was discarded. Research is ongoing.
Inexplicata Podcasts covering items from UFO / paranormal history in Spain, Latin America and the Caribbean