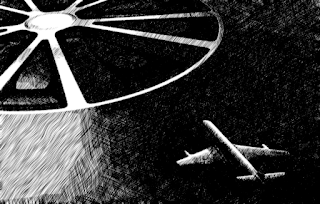 Spain: Pilots Report a UFO "The Size of an Island"

The strange event was attested by two airplanes passing over the Spanish city of Vigo from America on their way to Madrid.

Two airline pilots at the helm of separate commercial flights plowing the North America to Madrid rout certified having seen a UFO at an altitude of 9000 having a tremendous size, perhaps the largest ever seen, as they flew over the Galician coast facing Vigo. This was the testimony of one of the pilots - Juan Reyes - on the Cuarto Milenio television program last Sunday as show host Iker Jimenez looked in in astonishment.

The event took place one night in March 1997 and we have knowledge of it thanks to the written report made before the aerial navigation authorities. The protagonist indicated, however, that "the matter remains under investigation and therefore closed to the public." 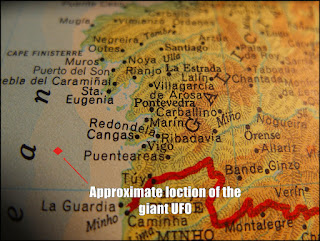 The pilot of the Air Europa airline explained the he was flying from New York and that as he passed the Galician coastline, some 90 kilometers, but in a straight line, the crew was able to see a gigantic structure with lights in a position where there should be nothing but sea.

It could not be land or a ship, given its size, which the commander compared with his native island of Grand Canaria. It seemed to him like a platform with two very powerful lights at its center, illuminating the entire unidentified flying object. They notified the Madrid Tower and air traffic control, in turn, requested confirmation to ratify or deny the sighting from a flight inbound from Canada, which was ten seconds behind in the air corridor for safety reasons. And so it was: the pilot of the second aircraft confirmed the sighting of his colleague, and also left a written report. Nothing further has been known about the investigation, which is surprising when the size and location of the structure is considered, and in spite of the 22 years that have elapsed since the event.