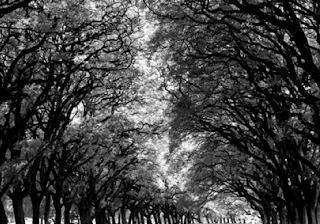 A report submitted by Rodrigo Zion to Luis Burgos from FAO: "On Saturday, November 3 I was touring the forests of Palermo, Buenos Aires gazing at native plants and birds with group from the University and fellow enthusiastas. At approimately 10:00 a.m. I saw a BRIGHT OBJECT (emphasis in the original) in the clear skies. I couldn't tell if it was moving, but I could see that this alleged sphere was linked to something thin in its lower section, like a rod, perhaps similar in length to the object's diameter. Being that the tour of the forest had a set intinerary, I had to proceed with the rest of the group and lost the object from sight. I was able to take a picture of the object with my Huawei cellphone, but given the distance and resolution, barely anything can be seen. I do not know what this might have been."

Burgos adds: "We have hitherto not received similar reports in the region, but at the exact same time as the Palermo sighting, Josefina Ferrari and her mother Zulma Garrido were also alble to record an odd flying object at Cerro San Bernardo, Salta."
Inexplicata Podcasts covering items from UFO / paranormal history in Spain, Latin America and the Caribbean