Argentina: A Mothership in Coronel Vidal 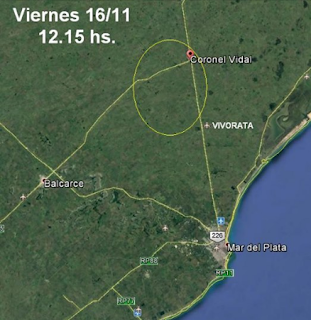 Argentina: A Mothership in Coronel Vidal

"On Friday the 16th of this month (November 2018) at 12:14 noon I had finished my teaching duties at the Coronel Vidal Agricultural School (Buenos Aires), located on Route 55, and was in the company of another female instructor. The School has 300 meter long exit driveway to Route 55. The other instructor was knowledgeable about aircraft - she likes them and her father takes flying classes at the air club). At approximately three to four thousand meters to the south, at an altitude of 300 meters, we saw a white aircraft. I said to her: "Look, it's a plane" because I was surprised to see an airliner flying at that altitude over that area, heading from East to West, at what seemed to be low speed. It seemed so odd to us that I crossed the road and stopped the car on the grass to look at it through my binoculars (10x50 magnification). The "alleged aircraft" had no tail or windows, and appeared to have sort of dark keel halfway down its middle. It seemed like a flattened Zeppelin of some sort. It also appeared not to have any wings, or if it had them, these were very small. My companion and I looked at until we couldn't see it anymore, but not because it went away, as it did not travel at high speed. It was as if it had suddenly "vanished". I checked with the Coronel Vidal air club (about a kilometer distant from the school) to see if any aircraft had been aloft at that time, but they said no. The object seemed to be headed to the region of the Balcarce Mountains." (Report courtesy of Pablo Salido, furnished by Luis Burgos of FAO. Translation (c) 2018, S. Corrales, IHU)
Inexplicata Podcasts covering items from UFO / paranormal history in Spain, Latin America and the Caribbean