Necochea is a city located on the Atlantic Coast of the Province of Buenos Aires, Argentina. It is the county seat and has a major port facility, as it is located at the mouth of the Quequén Grande River and the Argentinean Sea. The city is a chosen destination for thousands of tourist who spend their vacation time in the widest beaches of Argentina. Necochea is considered one of the finest beaches in the country.

The Miguel Lillo Park, with over 640 acres of pines and eucalyptus trees, can be found along the coastline, representing the city’s “lung”, surrounded by médanos (of various types). Further south we find coastal caves produced by sea erosion as well as various cliffs. Added to this, the Quequén River separates the cities of Necochea and Quequén, providing several options to enjoy the various alternatives the city has to offer its visitors and residents alike (water sports, mangrove tours, 4x4 off-roading, etc.)

During the week of November 18, 2013 I received a phone call from a co-worker who sent a strange image taken by her son Alejandro on Sunday, 17 November, a day when temperatures were in excess of 31 degrees centigrade. She added no further details, only asked me to take a look at it and to give her my opinion.

I opened the file and saw two beautiful images of the sunset along the Necochean coastline. But the 2nd photograph showed a strange humanoid figure, very tall, that wasn’t noticed by anyone.

The UFO case histories of the Necochea region are abundant. I have personally investigated many cases over the past 30 years, finding true incidents involving UFO encounters (with witnesses of various social backgrounds and educational levels), cases with photo and film evidence, cases of strange imprints throughout various parts of the city (park, countryside, rural areas), and cases involving UFO occupant encounters (park, beach, etc.). All of these occurred at various points of the city of Necochea (beach, park, river, downtown, countryside, etc.). 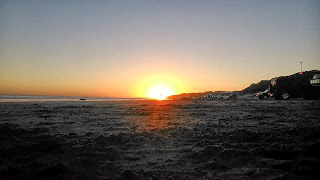 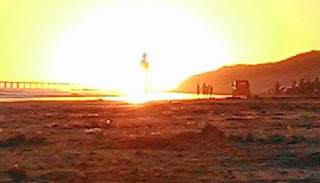 The photo in question was taken by a 28 year old named Luis Alejandro Nielsen, a marketing technician with a degree from the University of Belgrano. He is currently employed in the operations division of a major shipping agency. He lives in Necochea with his family.

This then is the main summarized information. The images were submitted for analysis to the Fundación Argentina de Ovnilogía (FAO) led by my friend and renowned researcher Luis Burgos.

Initial results show that it is not a fraud. A humanoid shape of large size can be seen, apparently floating over the sand and not casting a shadow. 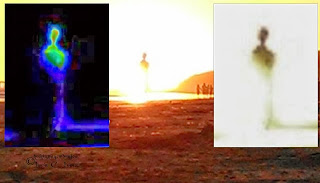 This case, which occurred on Sunday, 17 November 2013 on the Necochea coast has an Argentinean analog that was investigated by Luis Burgos and his team, which he called “Los Seres de la Laguna: Una fotografia unica en Argentina?” detailing the apparition on a photograph of a strange entity who was not seen by anyone either.

“According to his story, on 14 March 2010, Easter Week, Ivan D, decided to spend the holiday with his family at Laguna del Monte. Traveling there with his wife Vanina, his two young sons (ages 2 and 8 respectively) and the rest of the family group. A total of eight members. Once by the lakeside, he began taking photos with his digital camera. He took several family and landscape shots between 14 and 16 hours that afternoon.

“Hours later, Ivan.D (38 years old at the time) “….checked the material for that day on his computer, the photo taken of his 8 year old son at 15:56 hours. The boy does not appear in the photo as he quickly darted behind a tree. But he was perplexed: a strange, enigmatic SILHOUETTE, not someone with human features, “appeared” at the edge of the lagoon, at a regular distance from the family group and to the left of the photo. He immediately drew his own conclusions, certain that it wasn’t a regular person… from the multiple photos taken that afternoon, this one was the only one containing the strange figure, following a review of the material.”

[Readers of INEXPLICATA can find an interview with the protagonist at http://inexplicata.blogspot.com/2010/07/lagoon-creature-unique-argentinean.html]

In both cases (Necochea, 2013 and Laguna del Monte, 2010) the similarity between them is repeated. The strange humanoid figure was only seen after the images were dumped into the computer. In both cases, they are anthropomorphic and tall. Analyses showed that there was no fraud involved and that the image in each incident is real. There it is. From all the photos taken that day, this strange figure appears in only one of them.

The present Necochea case and the Laguna del Monte event constitute, without a doubt, two unique and relevant cases in the Republic of Argentina. Luis Alejandro Nielsen is a young resident of Necochea who works and leads a normal life, his story is reliable, and I also know part of his family for many years. He deserves trust and total assurance in his testimony.

There is no question that the “The Humanoid of Necochea Beach, Argentina” will prompt many discussions in the UFO field, and we will pursue our investigations into the matter.