Santiago García: Burned by a UFO – The Incredible Story of a Family from La Laguna 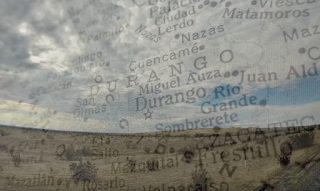 Santiago García: Burned by a UFO – The Incredible Story of a Family from La Laguna
Originally featured in Contactos Extraterrestres Magazine, 1976.

[Santiago García stood out among the writer/researchers of the 1970s Mexican UFO scene. Our friend and colleague Alfonso Salazar has kindly provided his Facebook readers a scan of one of García’s articles about high strangeness in his native northern Mexico, which we have translated for INEXPLICATA’s readers – Scott Corrales]

“…We decided to take a shortcut that lead back to our little town faster. It was then that we began hearing a noise similar to the one made by electric power plants. But we couldn’t see a thing. Around five minutes later we saw a big silver ball flying over our heads, and suddenly felt affected by it…”

I was given the news by my friend, Dr. Luis Maeda Villalobos, and what I heard was disconcerting: at a little ranch near the town of Mapimí in the state of Durango in the Mexican Republic, a UFO had inflicted burns on a 50-year-old man and a 16-year-old youth on the evening of 22 January 1977. The story became public and landed like a bomb at the Instituto de Investigaciones Científicas, Históricas y Geográficas de la Laguna. Many hypotheses were put forth about the case. Skeptics, believers and scoffers issued conjectures that suited their positions; I was interested in what had taken place. There was the possibility of conducting an investigation as well as writing a report for Contactos Extraterrestres magazine. The event appeared to confirm information known to UFO researchers: in certain instances, the maneuvers made by these devices can be hazardous to those witnessing them. Oh the other hand, the phenomenon had occurred, meaning fully, in a scarcely inhabited area. I thought at first that a deeper study of the situation was warranted and set out to do so.

I learned that the news item provided by my friend Doctor Maeda had been given to him by a patient of his who lived in Torreón, Coahuila; I also learned that the burn victims had been interned at the social security hospital of the city in question. Further details revealed that the UFO burn victims had suffered first, second and third degree burns, and that evidence of radiation had also been found. The latter was particularly significant, as the medical report made clear that the burns were not due to contact with any flammable material, but rather, had been the consequence of exposure to strongly radioactive material. I found it hard to picture such a material existing in the area where the phenomenon occurred. My curiosity led me to further research.

Dr. Luis Maeda adduced further information. The man who had suffered the burn lived in Mapimí, Durango, but Maeda had no idea of his address. This was not a hindrance – if one sets one’s mind to it, finding someone in a small town isn’t hard, and especially if the person being sought after was burned by a UFO.

In Search of the Burn Victim

The following day – Saturday, six o’clock in the morning – I headed to Mapimí. I was certain that in a few hours I would be talking to the person I was interested in meeting.
I reached the town and asked around for the domicile of the person who had been burned by a UFO, but no one gave me the information I needed. My search was becoming anxious. I began thinking that I wasn’t framing my question properly, so I changed tack: “Did anyone know where I could find the home of the man who’d been burned by a fireball? Yes, the man who had an accident on 22 January!” Those who listened to my words laughed at them. “UFOs? Fireballs? This man must be crazy. Who the hell knows who he’s looking for?”

I’d reached Mapimí at 7:30 a.m. I was so sure that I would find the UFO victim that I’d even brought along my camera, with spare rolls of film in case I had to take many shots of the victim. By midday I was weighted down by both failure and the camera. I couldn’t find the slightest trace of the character, not even his relatives, or any other witness to the alleged event – my burn victim appeared to be non-existent. Could it be that the UFO story was merely a hoax? That’s what I thought.

I remembered that there’s a village called Hojuela not far from Mapimí. The place had been a prosperous mining community in the past, but it is currently nearly uninhabited. Abandoned mines, ruined buildings, businesses that had seen better times. I was interested in this small town in the state of Durango, as it had often been the location of many UFO sightings. Maybe I would find a clue to the burn victims here; but it was all in vain. The objects of my quest apparently did not exist, or no one knew a thing about them. Gripped by despair, I returned to Torreón with not a single clue to go on.

Monday, February 7, early in the morning. The intercom system at the school where I teach crackled – the secretary wanted to see me. I supposed that information one of my students was required. But before reaching the secretary, something caught my eye. Almost right in front of me stood a 16-year-old girl, escorted by a much older woman. The girl had burn marks on her arms and her scalp. I suddenly felt that she was one of the two individuals that I’d unsuccessfully gone looking for.

I supposed correctly. I approached the teenager, asked if she was looking for me, and added if her visit had something to do with a UFO matter, to which she replied in the affirmative. At that moment, her escort interrupted to tell me what had taken place. She gave me many details very quickly, so I begged her to excuse me while I went back for my tape recorder. Her reaction was abrupt: “No, please! We don’t want people to see us as freaks!” She then added: “We don’t want you disclosing our names to anyone.” 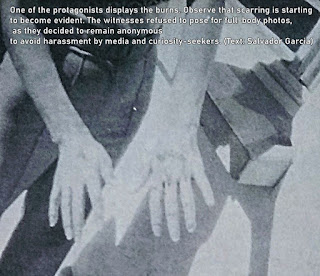 The story was starting to acquire a sensational turn. I wanted to know more about the subject and availed myself of the opportunity to ask about the accident. I asked about what had happened, to which she replied the following: “On 22 January, my husband left home early accompanied by my daughter. They were off to see a ‘comadre’ of ours who lives in a village called Marabunta, not far from Mapimí, to take her some items she’d requested and to invite her to come over to our home, as we were about to christen a child of ours. The hour was getting late and my husband and daughter weren’t back yet. I started to worry, since this was taking them too long.”

In an effort to get some specifics, I asked the woman if she had any idea of the time when she began to worry. “Of course,” she said. “The programming on Radio Ranchito (a Torreón-based station with programs aimed at rural residents) was coming to a close, so it was about six in the evening. I thought by then that my husband’s vehicle had broken down and he’d gone looking for a mechanic. But just as I was thinking that, my husband walked through the door. His face was burned, as well as his arms. The sleeves of his jacket were burned, as if someone had held a blowtorch to them. He was frightened and on the verge of tears. I asked where the girl, our daughter was. He answered that she’d been taken off to Torreón, to the Social Security hospital. When he told me that, I began to weep. He consoled me and told me not to worry, that the girl had only suffered slight burns, and that doctors would almost surely make her well.”

At this point in her story, the woman was visibly nervous. But I insisted on knowing her name and those of her daughter and husband. I told her that if she wanted her story to be believed, it was necessary for her to give me the requested information, as well as their address, as I knew for a fact that they didn’t live in Mapimí, but rather in some other small community or ranch. In spite of my pleas and arguments, I wasn’t able to find out anything more about the subject and her family, except that she and her daughter called each other “Licha” (a diminutive of Alicia or Luisa, perhaps?)

[The article ends abruptly at this point]

[Translation © 2020 S. Corrales IHU with thanks to Alfonso Salazar]