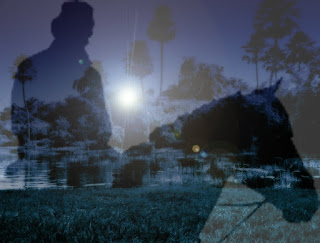 During the 1980s and 1990s, residents of the interior of our province were witnesses to a number of cases of varying importance, classified according to renown world-class researchers as close encounters. The first classification, which still endures, was the one created by U.S. scientist Dr. Joseph Allen Hynek, an astrophysicist and astronomer of considerable importance, who started out as an earnest detractor of the UFO phenomenon until he came across a number of cases that prompted him to conduct research. He later became a major investigator and disseminator of the UFO subject. He classified them as follows:

The case that concerns us took place on Sunday, 18 February 1996 in the peaceful locality of Mburucuyá, some 144 kilometers distant from the capital. Numerous reslidents witnessed how a luminous unidentified object virtually paraded over the community, issuing flashes of many colors and keeping the citizenry on edge for approximately five to six minutes.

Radio Alfa FM sounded the alarm an people turned out in droves to the edge of Route 13, where they were treated to the sight of a strange object that emitted a very odd light, whose color was akin to bright white shifting to pink and then practically red. Later, before the startled eyes of the many witnesses, the object changed position several times with its lights off. The story prompted the immediate presence of Máximo Cantero, a 35-year-old man at the time, a veteran of the Malvinas (Falklands) War, married with four children. He retold a spectacular experience he had had the night before, possibly with the very same object.

Speaking before a radio audience, the man said that he had traveled to El Descabezado, a rural area located on Provincial Route 11. Since his car suffered an unexpected breakdown (it was rendered completely without power) and he was unable to fix it, he decided to set off to the town on foot - a 30 kilometer distance. On the road he came across a friend an neighbor, who loaned him his horse for a faster return trip, once informed of the accident. The animal would be returned at a suitable time once the problem had been solved. However, shortly after beginning his journey he saw a bright light that filled the countryside. 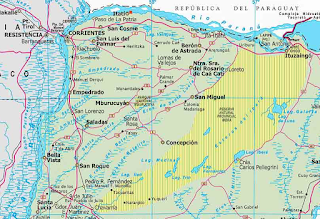 "I didn't pay it much mind at first," he said, "thinking it was moonlight. But as it grew brighter, I looked up and found myself staring at an oval object that made no noise whatsoever. It was completely silent. To my surprise, the object came closer and closer, slowly, and at that time my skin broke out in goose pimples, a very strange sensation. The horse also became rather nervous so I hurried along."

Being a practicing Catholic, he began to pray fervently until he reached the house of Rito Riquelme, another neighbor, who accompanied him with his wife to look at the object that remained motionless, constantly changing colors. All three were stunned.

When the object was near the couple and Cantero, it calmed down and after endless minutes, vanished at high speed into the firmament. After all this, the man chose to continue his journey, praying the Rosary, although the strange light appeared once more, escorting him into town.

Cantero traveled the remaining seven kilometers at high speed, reaching his house in a state of nervousness after all he had experienced. He later said that "he was fearful that he UFO, unknown object, or whatever it was, would take him and spirit him off to some unknown galaxy or planet as a sample of Earth life. At that time I thought about my wife, my children, my relatives and friends, who I would never see again."

He firmly stated that this is not the first time such strange apparitions in the sky have befallen him. The had occurred before, and he had even taken photos.

He ended by musing: What could these beings be after in this part of the Northeast, especially in Mburucuyá, whose villagers have been surveyed many times during that season of the year. Jokingly, he noted: "Perhaps they heard the sound of our chamamé during the last festival, which was highly successful, and couldn't resist to come and take a closer look at what was going on." He smiled, but his nervousness wasn't completely dispelled. It was, without question, an experience that marked him forever.

Further corroboration for Cantero's statement came two days later. Julio Sesín, a local businessman from Loma Alta in the first section of Mburucuyá, told the sheriff's office that he had seen an unidentified flying object in the area, of average size and very bright.

He also stated having seen - in the company of his children and some twenty locals, a bright, large pink light in motion, clearly visibly against the cloudy sky that had preceded a rainstorm. Just another of so many cases that have taken place in our province and which often do not become public knowledge, but which have taken place and continue to happen, no matter what anyone says.