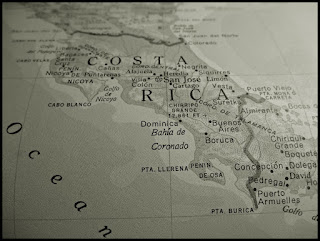 Architect Alejandro Sáenz had a very strange experience, one that would give the hardiest soul goosebumps. He was heading to inspect a construction project in his car when the vehicles odometer and clock were inexplicably tampered with, leaving both synchronized with the number three on their respective screens.

The alleged culprit for this disquieting incident was an unidentified flying object.

The startling experience occurred on May 11 at San Isidro de Heredia. As Sáenz drove, he was overcome by a strange sensation that caused him to stop and look at the sky.

Sáenz has the luck, virtue - or whatever name you care to give it - of seeing UFOs frequently, and that day was no exception. When he pulled over and looked up, he saw a blue object in the skies over Heredia.

Sáenz further adds that the object was spherical and flew at considerable speed, but he was nonetheless able to see it.

"At the moment it disappeared, the car died. I tried, but the battery wouldn't go. Several minutes later, the dashboard came to life without my having touched anything," he said.

Moments later, the architect became aware that the odometer that marks the kilometers elapsed, as well as the digital numbers of the clock, had been altered and now read - in both cases - the number three, repeated three times.

Sáenz photographed the uncanny event and returned home. It was 9:30 in the morning.

He immediately told his wife Cindy Picado what had transpired, as she has also had her share of UFO experiences. "The situation was bizarre and beyond any understanding," Alejandro added.

Sáenz tells us that he felt the UFO's presence in his house, and he went out to the balcony to see if he could watch it again.

"As I recorded, there were strange dots that I couldn't identify and they only appeared in the recording at the time. After a few seconds, an unidentified object similar to the first appeared.

Sáenz recorded the entire experience on vídeo and uploaded it to a web site.

Regarding the odometer, we checked with Hans Jiménez, a master mechanic in the Jiménez Auto Shop, located in Llorente de Tibás.

"Not anyone can tamper with an odometer. You need a special tool, a scanner, and anyone attempting it has to have computer skills," he said, adding that electronic parts can fail, although this seldom occurs.