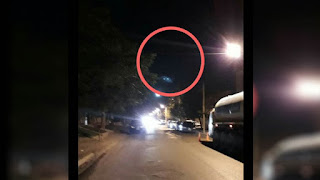 The phenomenon occurred in recent hours. One local told LU5 that it descended in a field scant meters from her home.

A resident of Chos Malal reported a strange phenomenon that took place in recent hours in a rural of the Northern Neuquén locality.

Marisa San Martín told LU5 that an unidentified flying object (UFO) startled her relatives in a field 30 kilometers distant from the town. "It was 50 meters from the house, lighting up everything, causing my mother astonishment," said the woman.

The vehicle, seen by its light from the Chos Malal urban area, did not get to land. The situation took place on Tuesday night at around 20:30 hours, but had already been seen on Monday.

"It was about 6 meters in the air and remained for some 20 minutes, then it took off," said Marisa, who added: "Something similar occurred two years ago."

She denied that it could be a drone since the area where the "flying saucer" was located has no vehicular access that would have allowed anyone to enter and pilot the object. It wasn't a car either.

"Many took it as a joke, but several people saw it from Chos Malal itself," insists Marisa, adding: "My mother was left in a state of panic and fear, because we don't know what it might be."