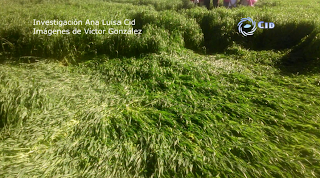 INEXPLICATA Contributing Editor Prof. Ana Luisa Cid and her collaborator Víctor González have shared a video with us about the "crop circles" that appeared earlier this week in Texcoco on the outskirts of Mexico City.

"The owner of the property," writes Prof. Cid in an article (http://analuisacid.com.mx/?p=1185#more-1185) "added that similar events have occurred on other occasions and there is nothing mysterious about them, since the rain and wind gusts of the previous evening caused the stalks of barley to fall over, adopting undefined shapes. This was visually corroborated by Víctor González. There are no "figures" or "messages" to be seen, merely some flattened areas.

This perception was corroborated by Daniel Monraz, an aviator and UFO researcher, who makes the following remark: "[...] during a storm there are winds that cause a shearing effect and reach down to the ground, flattening grass in a straight line, as if combing it. Something similar happened a month ago, here in the Municipality of Tala, Jalisco, and it was the same thing, produced by shearing winds..."

The video can be seen at http://youtu.be/YCW5BwwsmFg
Inexplicata Podcasts covering items from UFO / paranormal history in Spain, Latin America and the Caribbean