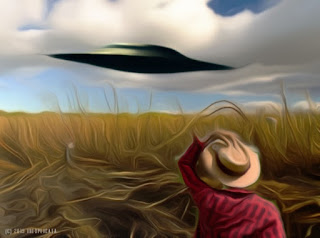 As reported in “Ovnis en Cuba, la Historia no contada” (UFOs in Cuba – The Untold Story) by Cuban UFO researcher and filmmaker Hugo Parrado Fracos: “On 23 February 1997 at approximately 11:00, Jorge Luis Borges, a heavy equipment operator for the Mario Muñoz Cooperative in Jacán, Los Arabos, Province of Matanzas, was transporting a tractor through a cane field located at the Palmillas farm when he heard a loud explosion. Borges immediately got out of the tractor, thinking something highly unusual had occurred. He immediately noticed the presence of a disc-shaped object similar to a typical silver water tank some 30 meters distant from where he stood. Seconds later, a door opened on the vessel and a humanoid occupant, standing 1.70 meters, stepped outside, wearing a helmet that covered its features. The strange being began walking normally toward the witness, crouching to pick up some plant or soil samples, both abundant at that location. Subsequently, the humanoid returned to the UFO, getting inside and the door closing behind him. Suddenly, another loud explosion was heard, marking the unknown device’s vertical ascent, becoming lost in the sky at high speed. The tractor operator abandoned his equipment and according to accounts, ran several kilometers to the town of Los Arabos, hollering as he did so. He informed the authorities, causing a stir in the area. According to reports, a Commission opened an investigation on-site. Up to here is what has been gleaned by Parrado in his interesting book.

“On the afternoon of 3 May 1997, while performing my duties at the Matanzas Meteorological Institute, I received a phone call from the Colón Meteorological Station, saying that a close encounter of the third kind (CE3K) had occurred in a cane field near Los Arabos and that there had been considerable upheaval in that area. I was able to corroborate the case and interview several people who made reference to the incident. Days later, I spoke to a specialist at the Institute of Geophysics and Astronomy (IGA) in this regard. Subsequently, UFO researchers from the city of Colón confirmed this. At no time did PIFAAM conduct investigations directly with Mr. Borges regarding his interesting experience.

The close encounter has similarities with the one that took place near Torrientes, also in the Province of Matanzas: a humanoid with a covered face, collecting specimens, and an explosion prior to landing and upon takeoff. But in the Torrientes case, the UFO took off horizontally at high speed toward the south after having ascended vertically a few meters from its landing spot, a small plot where the witness, a peasant named Adolfo Zárate, was doing work on 15 October 1995 at 9:30 a.m.