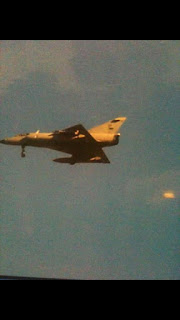 Contributing editor Guillermo Giménez has provided us with the following image: "A very good photo of an Argentinean Air Force Mirage fighter being escorted by a UFO. The photo was taken at the Villa Reynolds Airbase, in San Luis, at 1800 hours. The fighter pilot was able to see the strange object. The photo was taken by Captain Sergio Figueroa and subjected to an exhaustive analysis by the military, ascertaining the flying object's veracity and discarding the likelihood of any conventional phenomenon and/or technical error. The reality of UFOs over our skies is undeniable. This photo appears as the cover to the book "Encuentros entre Pilotos y OVNIS en Argentina" by researcher Carlos Ferguson."
Inexplicata Podcasts covering items from UFO / paranormal history in Spain, Latin America and the Caribbean