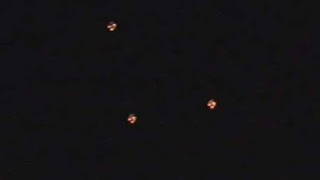 Since December 1st there have been more reports of UFOs in the northern and central regions of our country. These are strange spherical flying objects with a silvery, metallic appearance - if seen by daylight - or highly luminous with hues ranging from white to orange, if at night. In both cases the number of eyewitnesses who reach for their mobile devices and start taking photographs or make videos is startling.

On the evening of December 9th, Christian Jaramillo, traveling along Tijuana, baja California's Bulevar 2000, came across three highly luminous flying objects, of considerable dimensions, flying at low altitude. He was surprised by the scene, and did not hear the objects issue any noise whatsoever.

"The witness pulled over to the side of the road, turned on his blinking lights, got out of the vehicle and started taking photos of the mysterious objects. There are two videos and three photographs altogether," said researcher Dino de Labra, who shared these image. The objects are above the public street lighting and were in the same place for nearly 15 minutes, according to the witness, prior to disappearing.

De Labra stated that this location is one of the hot spots - since April 2016 - where a considerable number of people claim having been abducted by aliens, who have told them about the vast planetary changes our world will be facing, and have supplied them with a series of symbols that lack any meaning for the moment. This is also the area where some people have claimed seeing strange lights descending and apparently reconnoitering the surface.