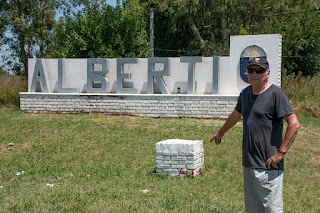 At 18:30 hours on 7 February 1963, Felix Carrizo was driving in his car, accompanied by his wife, along National Route 5, running from Buenos Aires to the province of La Pampa. In the vicinity of Alberti, he slowed down and pulled to a complete stop. His wife was pointing nervously at "something" enormous and bright that hovered to the right of the road.

There was, in fact, a cylindrical grey object hovering over a stand of trees, motionless and slightly tilted. It appeared to 'float'. Both witnesses could not believe what they were seeing. "It could have been larger than 200 meters, and perhaps 20 meters in diameter," they said. "There was a blinding light issuing from its central area, strong enough to hurt the eyes. Four rectangular lights resembling portholes blinked on its fuselage, one of them above the immensely powerful light and the remaining three below."

Felix Carrizo remembered that he had a photo camera in the back seat of the car, and took a shot without a moment's hesitation. Upon lowering the camera, the object began to move. A cloud-darkened sky filled the backdrop. "Before I was able to take a second shot, the luminous cylinder rose at high speed and with successive pulses. It then assumed a horizontal position and vanished into space." The experience lasted little over a minute. Carrizo was using a Schneider Alpha-Xenar 1: 3,5/75 zoom lens, a shutter speed of 1/250 and an f16 stop. He used Kodak Plus X Pan (Type B, 35 mm).

These, then ware the specifics of the event. During a 2020 visit, we were unable to locate the exact location of the incident and later resorted to Luis Bianchi (FAO Central) to create an artistic rendition and Patricio Barrancos (FAO Baires) to color enhance it. 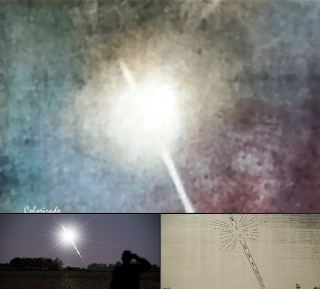